Anyone who says that a southern ring road will solve traffic problems never goes to the Northern half of the A4174 on a weekday.
This is the MOD car park approach to the A4174, not even the RR proper, yet the road is blocked by cars 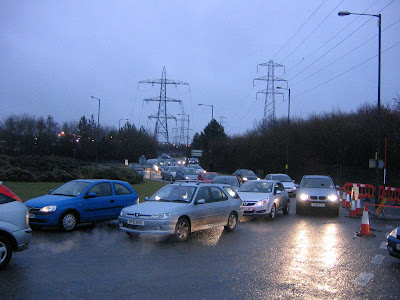 Here they are stuck, waiting to get onto the ring road. What is wrong? Don't know. When will it be fixed? Don't know. The BMW to the far right of the pic knows a sneaky solution, an "exit strategy" that works. Too bad the MOD don't have viable exit strategies for other problems, like wars in Afghanistan. 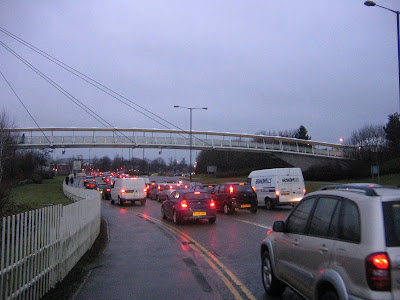 Looking north to the roundabout you can see the BMW way ahead in the left lane. Instead of trying to turn right at the car park exit roundabout, it went left as far as the abbey wood nursery, did a U-turn there where the lane separation goes away, and snuck up the left hand lane for vehicles heading west. The congestion is mostly for vehicles heading east towards the M32.

Whatever happened, it spreads. Here is Muller Road, fifteen minutes later. Same thing: no movement of motors towards the M32. 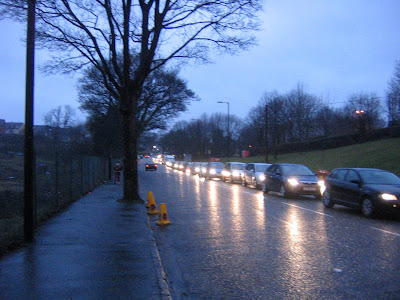 South Gloucs. council needs to recognise the problem and widen the A4174, while Bristol Council needs to listen to us, and widen Muller Road. Cut down the trees, take away the unused pavement. Job done.
Posted by Bristol Traffic at 07:53

"South Gloucs. council needs to recognise the problem and widen the A4174"

They are and they are using Greater Bristol Bus Network money to do it.