Persecution in Monty: beware of what you ask for

M741UFC, sporting a ticket from the police for blocking the pavement and a door in Upper Cheltenham Place. 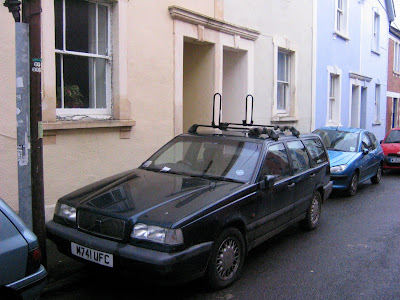 We've seen that door blocked by cars before; they must be grateful that the police are issuing tickets, so finally they can get their "bike, buggies or Kayak" in and out their house.

Except, well, isn't that a kayak roof rack? In which case the vehicle that's been given a ticket for blocking a door is not some random Monty resident, it could well belong to the resident of the house whose door has been blocked. Oops.
Posted by Bristol Traffic at 06:55