While visiting the abbeywood area (we drove, obviously), it seemed appropriate to check out the Abbey Wood station. We had heard of this, MoD backed station put in for commuters, offers fast travel from Wales and templemeads. Fortunately, no functional connectivity from the Severn Beach line, as that would actually make it possible for commuters in that part of the city to get in by train rather than by car -so threaten the entire economy of the city.

There are some signs of it being used, and that bicycles are a problem. All along the signs up to the station: no bicycles, and cycles dismount. 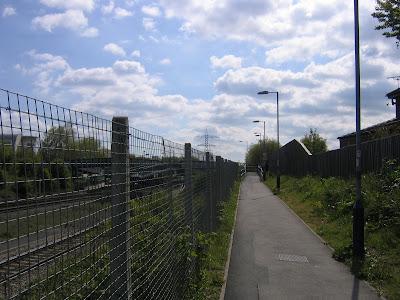 Coming down the hill, in the other direction, the same signs, in case bicycles come from that direction. 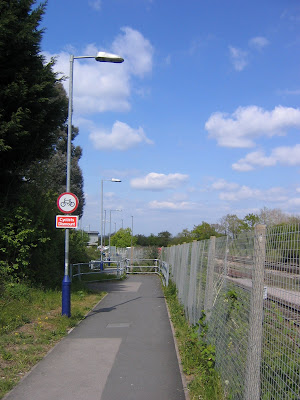 what kind of criminals do people here fear? 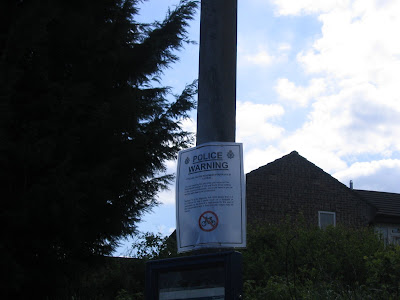 Ones who ignore police warning signs, although the fact the 1835 law they cite is about pavements beside public roads, doesn't cover footpaths, railway bridges and probably not even the bit of railway car park by the sign may be one cause. 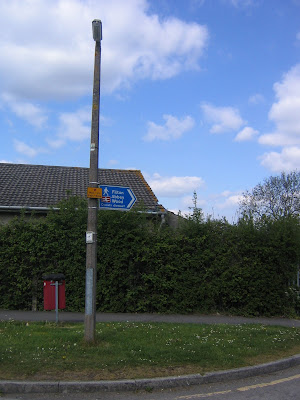 There are also cycles dismount signs on the footpath signs, again, presumably disregarded.. We were not aware that cycles on pavements were such a threat to society in this corner of the Abbey Wood sprawl, but clearly it is.

After a bit of research, we identified a potential cause. If you look at the abbey wood area on the council-supplied map (large PDF file), it's clear all the footpaths and footbridges are marked as green, places bicycles are welcome. There is a small note "Bridge please walk", but it doesn't say how far, and it doesn't cover the footpath with the cycles dismount sign.

The fact that the councils are giving away maps encouraging cycling is leading to this problem of bicycles on pavements, one the police are left to deal with.

All money enforcing cyclists dismount signs should come from the cycling city budget!
Posted by Bristol Traffic at 07:53