On the west side of the MOD site is this path. We don't know where it goes, as that would involve walking or cycling it. Presumably it comes out by the A4174 behind the ex-woolworths. It is marked as shared use, but as it is unused, perhaps it could be used for MOD parking instead. 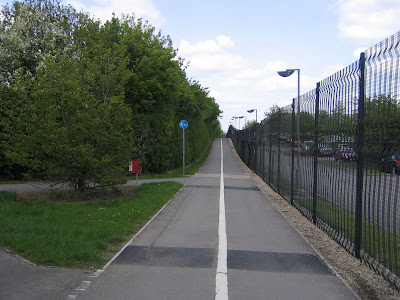 To the left, there is a route to Lockleaze. But not for bicycles -despite this being marked in green on the cycling city map! 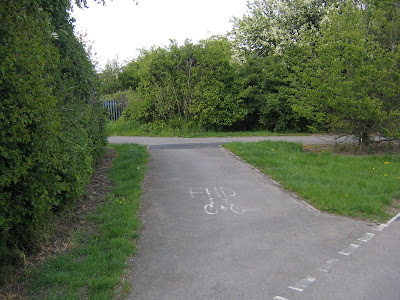 And look! when we went there, some teenager trying to cycle over. That is despite the money invested in a no-bicycle barrier! 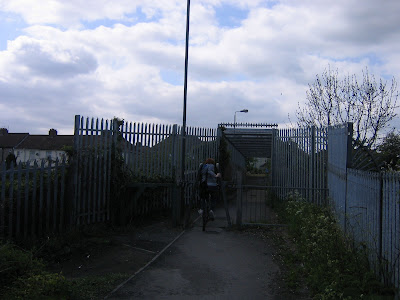 These cyclists are selfish and dangerous. They should recognise that money spent adding no-bicycle barriers to cycling city routes shows that South Gloucester isn't on their site, and aspire to the dream we in the North Fringe live: to spend 45 minutes every evening stuck in the A4174 ring road in a high-performance car. It's not about the fastest or most cost effective form of transport, it's about visible displays of wealth and status. Cycling on back paths behind Lockleaze achieves none of this, and does not contribute to the national economy either.
Posted by Bristol Traffic at 11:08

Those are the barriers that you're meant to be able to dismount and push your bike through .. that you can't fit a bike with a child seat attached through. They have them on the parks in between Bedminster Rd and Totterdown too, on the entrance to the park with the playground.

nice. Here they are to stop motorbikes.