Someone warned us about changes at Abbey Wood, with the famous "gated" bike path, the one where whoever designed the bike path wasn't in touch with whoever was designing the gates designed -during the 1990s- to stop an IRA-class of attack. The gate would prevent militant cyclists from attacking the car park, and while this may seem unlikely, it is folklore that on the day Michael Portillo and the Queen opened the facility, there was in fact a cycle police unit spotted fixing their puncture on this very bit of tarmac. 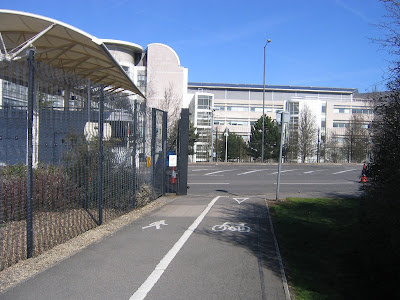 We drove over there and yes, someone had closed the gate, so pedestrian and bicycle access was now possible. This worried us, as it could imply that S. Gloucs cycling city money was actually being wasted on encouraging cycling, rather than forcing them out of our way on convenient rat runs.

We waited for a cyclist to come by, and rather adopt than our usual technique of setting a pitbull on them while shouting "It's OK, he just gets a bit scared by bicycles!" as our pet dog, Roadkill, savaged their lycra-clad legs, this time we filmed the tax dodger who could well be the first person ever to make use of this bike lane. That is, if you consider cyclists to be people.


Sadly for this particular government-funded tax dodger, because the gate was closed, he was unable to enter the Abbey Wood MoD facility, that being his place of employment. We left him there -pleased that by closing the access route to work, the cycle lane was still without any value whatsoever.

Since this path opening event on April 8, the gate has been reopened and the path has returned to its normal state. You cannot walk or cycle out of it, but if you could, you could get into work.
Posted by Bristol Traffic at 07:18

Your video is private?

MOD been in touch?