We have been sent some photos and a video showing that the new Muller Road crossing is nearly ready -the council's subcontractors are just checking everything is good to go on this, the showcase cycle city route. 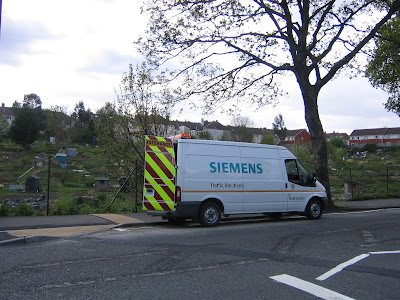 As any frequent visitor to this site will know, being able to park on the zig-zags by crossings is considered important, so we are grateful that the Siemens team did check there were no problems. Sadly, this time the troublemaker of a reporter, "S" had a different opinion, and did apparently ask them WTF they were doing, but they gave the correct answer "I've got to park somewhere, mate". More to the point, this is the only place on the road you can park where you know that you won't get clipped by cars, so it's invaluable that parking rules here aren't enforced.
Our reporter did get a bit of on path video, showing that it doesn't inconvenience cars or pedestrians, merely bicycles trying to head up Muller Road. One schoolkid actually opts to cycle on the pavement -so endangering a jogger coming the other way.

If the kid is old enough to get home from school on their own, they are old enough to start aspiring to motorised transport. They should recognise that the Siemens Traffic signalling van (BN59YEC we think) is parked here for their own good, and start saving up for a scooter, at the very least.
Posted by Bristol Traffic at 16:04