The ongoing theft of a bit of Muller Road from cars continues. One side effect is that it forces National and Europcar van rentals to park their vans up on the pavement, else this stretch isn't wide enough for two lanes of traffic. 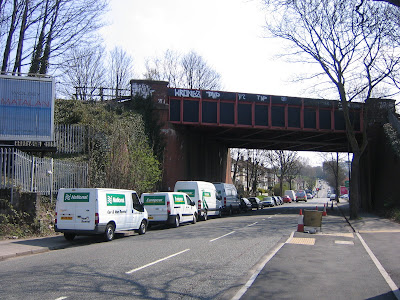 Looking the other way, we can see that Siemens are busy fixing this new -and utterly unwarranted- crossing up, one which apparently has a detector for approaching bikes, and so schedules them with green.

Some people may think that having the signalling van park BF07NYA so as to prevent bicycle access from the path onto the road is a sign of Institutionalised Motorism in the traffic planning world, one where only the safety and convenience of drivers and their passengers are considered, and that parking your van close to where your work is is more important than anything else. Those people -and having seen Crap Cycling and Walking in Waltham Forest we know who they are- are misguided. 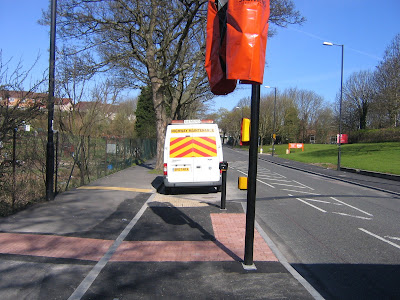 Out of sight behind the van, just past where the right turn is, a large lorry has been parked for a week. So what you say? Look at the back of it. Not only is the road-side corner bent, by its rear tyre is the remains of the body coloured bumper of a car that must have clipped it at speed, damaging the car and possibly injuring the passengers. 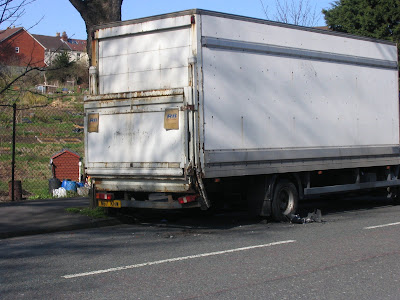 Muller Road joins the M32; you can come off it having driven from London, Birmingham or other places at 70-80 mph the whole way. When you get into the city you are still slowly adjusting to urban features like red lights, speed limits and pedestrians and cyclists getting in the way. While Portsmouth is dealing with this by needlessly lowering the speed limits on the M275, we believe the correct approach in Bristol is to keep the speed limits high and roads just off the motorway clear of pedestrians, cycles -and parked cars. That way, you can slowly adjust to being in town, encountering one feature at a time. First red lights, then lower limits, finally the other clutter of anti-car city streets.

Vehicles parking on Muller Road must park up on the pavement or behind the bike lane -not to prevent damage to their vehicles, but to help those drivers who are still driving "motorway style" to adjust slowly to the city streets. The driver who crashed into this car was probably just doing 40-50 late at night, expecting a fast empty journey home, then suddenly this white van with reflective bits appears out of nowhere, parked on the road. If it had not been for the trees preventing this vehicle from parking on the pavement, this collision could have been avoided.
Posted by Bristol Traffic at 07:45