Soon we will be free of this menace

The Royal Mail is phasing out its bicycles, replacing with (presumably diesel) vans. Yes, this will screw up the post's 10:10 commitment to global warming, make pollution worse, and shows that the Royal Mail's spreadsheet shows a different cost model of future oil and fuel costs from the Peak Oil people.

But it will mean: no more being stuck behind Posties who are trying to cycle up Cotham Brow with 20 Kg of mail, while you are in a hurrly. At least the students admit defeat and push their bikes up the pavement, some of these postmen -effectively professional cyclists- get in our way, and stay there, all the way up. 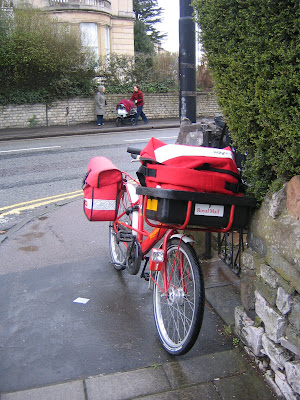 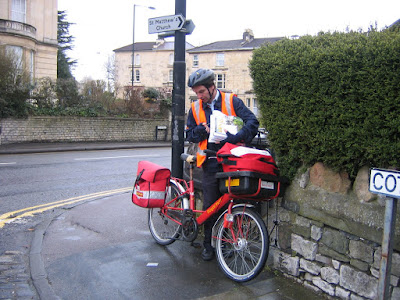 The best bit: rather than explain this away as the only way they can impose unrealistic schedules and weight loads on individual postmen and postwomen, the RM is saying they are doing this because cycling is too dangerous! We love this, it is one in the eye for cycling city, for Bristol's "have you tried cycling" signs up on the B4018 from Cribb's causeway to the Downs, for the "try cycling" propaganda the council pushes through our doors. If one of those council-funded pro-bicycle assistants turns up at our door, before we set the pit bulls on them, we will say "If cycling in Bristol is so good, how come it will be one of the first places in the country where the posties will have their bikes taken away?". Answer us that, eh?
Posted by Bristol Traffic at 07:22