One of our team members participated in the funeral procession.

The cycle hearse was supplied by Cap'n Bikebeard, a festival bike that was decorated for the event by Chris Hutt Junior. 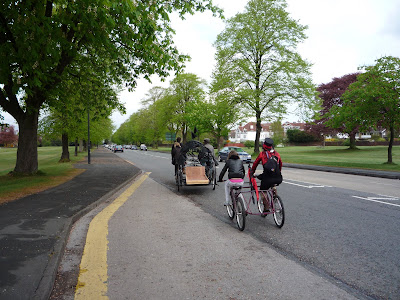 The hearse was actually encountered on the approach to the funeral directors, with it and the support vehicle, they brought westbury to their knees. 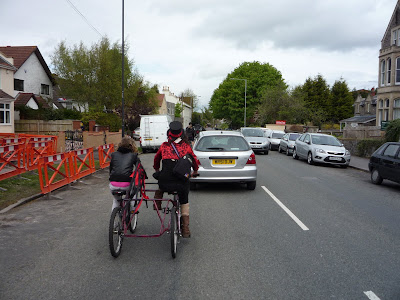 Indeed, it was very hard to take these photographs from a motor vehicle while handling a phone call and sounding the horn, especially as more cyclists kept joining the route. By the time we were in Westbury on Trym proper, the roundabout was taken over by these troublemakers. 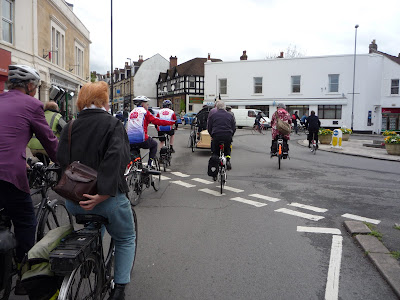 Out in the roundabout, artist and writer, Dru Marland. On the left, with purple jacket: John Grimshaw of Sustrans -who gave a very moving tribute. 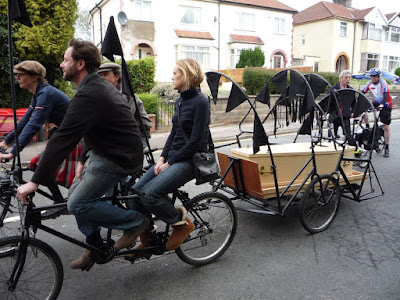 At the head of the procession, Chris Junior is on the front left of the hearse, Cap'n Bikebeard behind in the back row. Chris senior gets to take a rest on his last bike journey. Behind the hearse, Steve K of the cycling campaign and the CTC, with some of the CTC people in their roadie clothes.

Before anyone points out that by participating in this event we must be part of some kind of vast cycling conspiracy, we will point them to this video. As you can see, bringing up the tail of the parade is a large white van: us.

Such a vehicle actually benefits the cyclists as it ensures that nobody aggressive would try and overtake them, so we hope our contribution was appreciated. It is rare -indeed this is a precedent- that we did not try overtaking them, but then the sheer number of them made it tricky.

More coverage in parts two and three.
Posted by Bristol Traffic at 18:22