It's good to see that the new St Michaels' Hospital barriers are working to keep pedestrians feeling second class citizens. 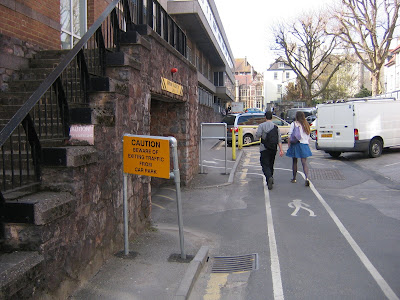 However, we are shocked to see that someone has already bent one of the warning signs! 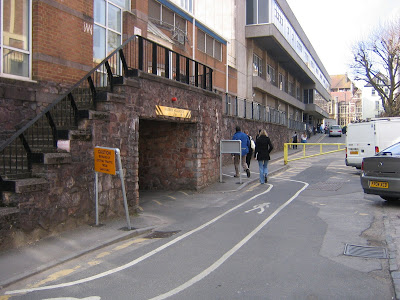 Who would do a thing like that? We suspect a cyclist. Who else would go down a pavement at speed, not looking where they are going. We are fortunate they hit this warning sign, and not a pedestrian, and that if they were injured there was at least a handy hospital alongside the car park.

We watched to see if the cyclists would stop now there had been accidents, but no, we saw two in a row nip through the parking pavement to the right of the barrier, then pull in. Such actions are dangerous.

Shortly thereafter, someone parked a vehicle to discourage such actions 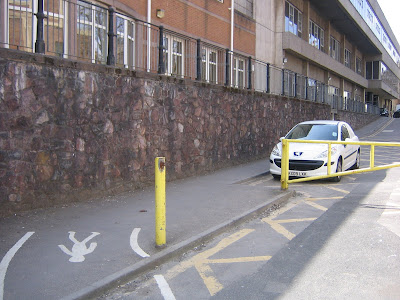 Sadly, despite the best efforts of the NHS, not only is there still a gap for bicycles, some pedestrians are walking outside of the designated walking area! 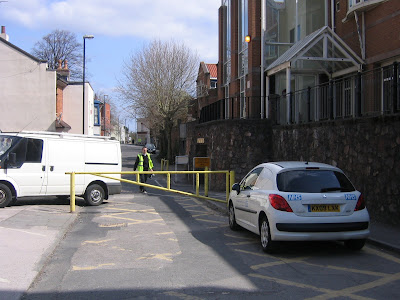 They may be wearing hi-viz and carrying a helmet, but this is no excuse for such dangerous activities.
Posted by Bristol Traffic at 19:40