The politicians are stealing our pavements!

We had looked forward to seeing one of the party leaders doing their set piece "one of the people riding on a bike" shots, so that we could accidentally clip them in our vehicle. Indeed, we drove around all morning looking for such a scene, but presumably their minders had recognised that the only people who ride bicycles in this city look and smell funny and it doesn't help win votes in the rest of the city, let alone the country. Eventually the passengers in the back of the bus started demanding that they actually get to Fishponds, so we had to return to our scheduled route. Also you have to be careful when you go off-route in a double decker, as low bridges can catch you out.

We are grateful, however, for this photo send to us by Andrew Stagg, who was part of the press entourage. It shows Nick Clegg, out for a walk in Westbury on Trym to meet people holding up mobile phones or banners protesting about something or other. 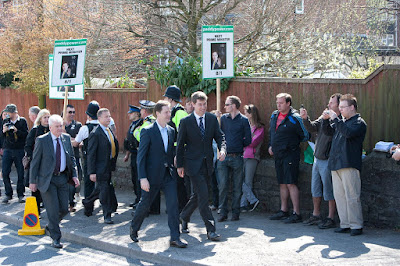 Think about it. A walk? Who walks in this city? Unless it is someone going from the school-keep-clear zone in their 4x4 to the school gate, or someone in the B&Q car park picking up a jet hose for driveway cleaning, the only people walking are the very elderly, children and students. The elderly are going to vote for whoever the Daily Mail tells them to, children can't vote, while students, on account of the fact they don't pay any tax yet, shouldn't be allowed to walk on the pavement, let alone have any say in who runs the country.

Yet here we have it, someone trying to be one of the people, despite the fact in this city to be one of the people means spending a hour a day stuck in the A4, A4174, A370 or the M32 roads swearing about the incompetence of the car in front, or stuck on Gloucester or Whiteladies road complaining about bicycles and pedestrians.  And to achieve this photoshoot, the pavement -our pavement- has been cleared of cars, the double yellow lines backed up by extra traffic cones and there are police around who are fining neither the politicians nor the protesters for using our parking area to walk around on.

Indeed, one of the security or propaganda minions is actually walking on the road, which is normally a ticketable offence as far as we are concerned, certainly something which absolves us of any blame if they should end up under our bus.

People still keep asking which politicial party Bristol Traffic, the city's premier car-centric news outlet will support. Well,  nobody has made an offer which is compelling enough, by which we mean a carrier bag full of money in a currency we trust, that being US$, Euros with german artwork on the coins and Swiss francs. When we asked the UKIP for their advertising funding in Euros they weren't willing to oblige. Do they mistake us for idiots? Bribe us in Sterling? Don't be serious!
Posted by Bristol Traffic at 07:33