Monty week: someone's getting let down

This was a shock to us. A space big enough for three cars outside that fine drinking establishment, the Beaufort. Very tempting to pull the Bristol Traffic white van in there on this weekday morning and have a few beers. But who should indicate and then pull in before we get a chance to execute the plan? A driving instructor. 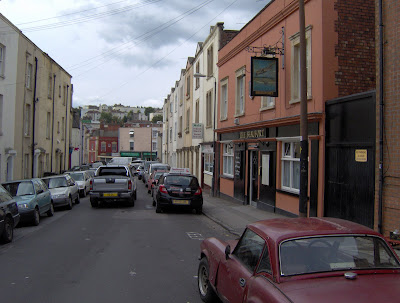 We understand why there is a space -it's the Friday before the bank holiday weekend, and many people are off in their cars and vans. But whoever is paying for the driving lesson is expecting to learn the skills for the city, our city, a city where a gap four vehicles long is so rare that it will go down in Montpelier folklore, like the time someone managed to get a stolen car a fair distance over the footbridge from Hurlingham Road.

While technically legal, parking this way isn't going to give the paying customer the training they need. Drivers in this city need to park two wheels up on the pavement! You need to pull out without indicating, as game theory implies the enemy -and every other road user is the enemy- will behave differently if they think you are looking when you pull out.

Our reporter apparently told the instructor of for his behaviour, and we shall report this incident to the city's driving instructor authority. The 2nd2None driving school is normally impeccable.
Posted by Bristol Traffic at 07:56