The bike/lorry collision on Cotham Hill -suspiciously a week after a "ghost bicycle" appeared on that road- has triggered a quick review of our data on the area. Neil Harrison, the local councillor states that there will be changes coming in the next 12-18 months as part of a Showcase Bus Route down Whiteladies Road, which will be interesting to see. Until then, the buildout make a nice parking area for YA55VDY, who is quite a regular visitor. 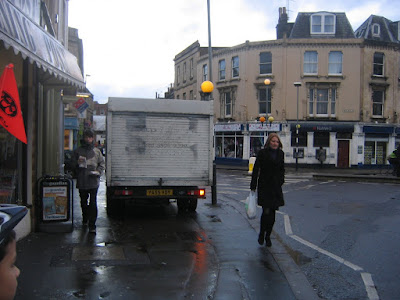 Cotham Hill is an interesting road: interesting shops, and the primary traffic is foot passengers to and from the University and Cotham Grammar; hence the various shops and cafes. But cars sprint up it to get to St Michael's Hill; it saves you going down to the lights at Tyndall's Park Avenue, and so gains 20-30 seconds. There is a price: you can wait for a while at the mini roundabout at the summit, unless you are extra aggressive there and pull out ahead of vehicles who have the right of way -and not just bicycles!

For cycle traffic, it is two way at the top, which is not something all vehicles expect. Cars sprinting across it are your main threat heading down on a bike, especially at peak redland-mum hours; 08:15-09:00 and 15:00-16:00. Then there is the junction at the bottom. Getting off and walking over the pedestrian crossing is the easiest way of dealing with that. Through some quirk in the software, pedestrians get lots of time on these lights, even during peak car commuter hours.

Cotham Hill is useful for anyone driving to the Clifton Down shopping area as it offers the only free, short-stay parking in the area now that the railway car park is pay-and-display. This means that any car/van traffic that doesn't want to pay to park heads up here, but of course the free parking spaces are gone, nobody wants to turn round so they park on the double yellow stretches instead. This is a classic example of "transitive" free parking: when you set off with the intent to park for free on a road, the absence of any legal parking space does not get in the way of your plans, you just park in the closest area remaining. Adding a nominal fee to the (limited duration) parking on this stretch might have some effect.

The Builder's Merchants adds the hazard of large vehicles entering/exiting, and their customers: van drivers. We have examined our back catalogue of data on this road, and have two videos from November alone

Notice the large domino's pizza lorry parked on single yellow lines and a bit of the zig zags., obscuring all visibility. We have seen them before.

As the bicycle approaches the junction, a white van pulls out in front of them from the builder's merchants. Fortunately, this tax-dodger was not "cycling too fast" so there were no problems.

This van shows the correct way to pull out in front of a bicycle: aggressively. By putting his foot down and going forward before pulling out, the driver of van HN56JYJ manages to get in front of the bicycle even though there wouldn't be room to do this safely if they pulled out directly.

Apparently, the cyclist, at the lights they not only held up the driver, they walked over to express their concerns about the van's lack of indicator use. You can hear the van driver -rightfully- disputing this: there's no need to indicate to non-tax payers; you can also hear his the horn as he is finally allowed to go. Note, sadly, the extremely damaged state of the front of the vehicle; he may have been driving over-aggressively at least once in the past. You have to remember to only run over pedestrians and cyclists, as they do less damage than other motor vehicles.
Posted by Bristol Traffic at 07:22

That camera is both terrible at picture and sound. Is that an atc2k? Looks like one.

You are just jealous because you don't have hydraulic disc brakes. I would add a soundtrack, except that the time I added a jesus and mary chain track youtube silenced it.

A moot point. I like drum brakes, but disc brakes look a bit 'fast' to me. Actually, I should practice what I don't preach and get the file and meths on my brake pads. Squeak, I say squeak...