Over in Westminster, the council are advocating that their enforcement officers have the right to issue spot fines for cyclists breaking the highway code. Although we think this isn't enough: bicycles should be banned for adults; using them should merit spot fines. we have been giving this idea some consideration.


In the end, we're against it. Why? The Highway Code. In particular, the entire section on road junctions.


Rule 172: You must give way to traffic if there is a give-way sign at the junction. All traffic, including bicycles. Bollocks.


Rule 174: Do not enter box junctions marked with yellow hashes unless you can exit. Bollocks.

Rule 178. Do not enter ASL boxes on red; allow cyclists time to clear when the lights change. Bollocks to that too.


Rule 182. Do not cut on in cyclists. Missing the point. We do that to make cycling more miserable.


Rule 183: When turning left "give way to any vehicles using a bus lane, cycle lane or tramway from either direction". This is some kind of joke, right?


You see our concern. If people get out there and start enforcing what are technically the legal traffic laws in this country, not the de-facto ones, then the resulting crack down on the things we need to do to get round our city would make driving round Bristol worse than it is today. That would be unacceptable. The satisfaction of seeing a bicycle fined for cycling through a pedestrian crossing would be offset by the tickets we would get ourselves.


The worst one is rule 170, the one that implies that pedestrians crossing the road at any junction have the right of way over turning vehicles. That is simply untrue. It is a good thing it is never mentioned to pedestrians, as even more people would die.


In the US, the country where, gloriously, jaywalking is a crime, they actually enforce that give way to pedestrians rule. Could you imagine if they started doing that in Britain? We would be stuffed.


No, no need to have the council enforce rules against bicycles. We drivers will make them suffer, and there is no point giving anyone in the council ideas, like letting them read the details of highway code.


On that topic, we have some sad news of the new Cotham Martyrs. Here is the summit of Cotham Hill, at the far end of where a woman cyclist ended up under a lorry last week. In the background, a traffic jam of cars on the school run. That church was set up to remember the Maryan Martyrs; the people burned alive for their religious beliefs at this very spot in the time of Queen Mary. This hill, no doubt to be full of whining tax-dodgers on their Bastard Hills of North Bristol ride, represents a key conflict point in the city over historical timescales, where people suffer due to state oppression of fundamental freedoms. Yesterday: religion. Today: parking. 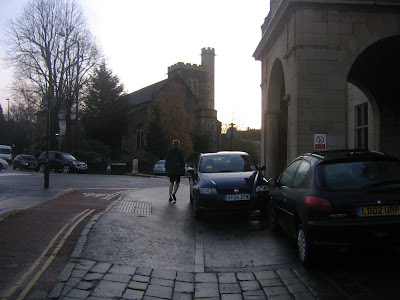 Cars have always parked here; when the council made the road one-way at the top and added a build-out, this added room for another row of cars on the pavement. We celebrated this only yesterday! Yet today, what do we see? One of the same cars, RF04ZFW parked precisely where it has been free to park in the past. Only today: a ticket! A ticket! Yet there is enough room for a pedestrian to get past on the build-out, so why the fuss? 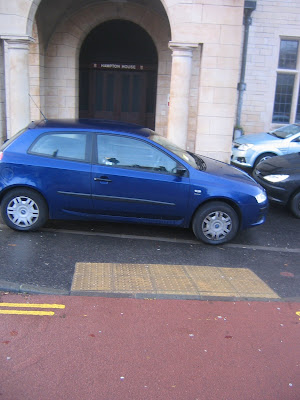 When you look from the side, you can see precisely how uncalled for it is. You cannot even accuse this car of parking on the pavement by double yellow lines, because where the pavement drops down to make it easier for parents to get their push chair onto the bicycle contraflow and so past the cars -there isn't any double yellow lines! Therefore parking on this buildout by the dropped kerb should not be illegal! We hope this car driver appeals.

We are also concerned that this anti-car theme appears to be getting worse. The question is, how to measure it? We have a plan.


We can assess the official anti-car resentment in the city by reporting "illegally" parked cars to the BPS control room, and seeing if they respond, and how long it takes.

This does not mean that we do not think that cars should not be free to park where they like, and that the whole idea of yellow lines were invented to bring in revenues to councils. Only that we can measure whether or not the council feels such actions are an issue by measuring their response time to calls. Which we can only do by reporting the vehicles themselves, by dialling the control 0117 903 8070 and reporting what may be perceived as "incidents" but which are in fact attempts by us Bristolians to stand up to an oppressive regime. The response time to the calls will be our way of formally assessing the oppressiveness of the regime. If we, say, report a row of lorries parked on the Stokes Croft bike lane, as we know there will be right now, without even having to bother to go over there, and then later, we do drop by and the vehicles have tickets: Bristol is getting more anti car. Yet if we report them and later on: no tickets, Bristol is resisting attempts by the cyclists to take over the city.

How you can help

For this to work, we need people all over the city reporting cars parked on pavements by double yellow lines, or on double yellow lines, such as those under bike lanes. Remember, we aren't being anti-car here, we want the council to ignore the calls and let Bristol's car and van drivers carry on as we have always done -but we want to make sure. We need to be sure that there isn't secretly a bit of the council cracking down on the cars and vans that keep the city moving. And the only way we can do that is by making the calls, and seeing what happens.

January, that is when the experiment begins. This month is the "before"; the baseline dataset. Nobody should report vehicles parked outside Hampton House, on Cotham Hill, on the bike lanes of Stokes Croft or Cheltenham Road. We must start by assessing what happens without interference. Look at your streets, take photographs, note if any tickets are issued.

[This experiment is supported by the NERC and ESRC funding bodies.]

Posted by Bristol Traffic at 10:56