BBC gets on message: bicycles are the problem

We were really worried when the House of Commons Public Accounts Committe report on road safety came out -once we'd read the report.
Key findings
We were worried. We we worried that they might pick up on our right to use a build-out by zig-zags for parking, such as demonstrated on Whiteladies Road by YA55VDY at 08:22 on October 7 2009. 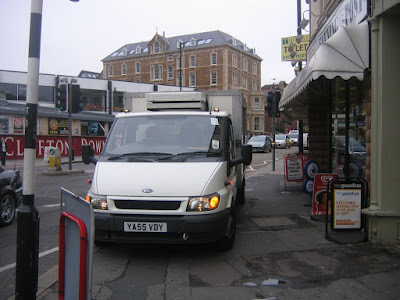 Similarly, we were worried they might express concern that driving and parking on pavements at popular junctions during the school run might be viewed as endangering kids, such as again demonstratedby YA55VDY at 08:13 on October 17, 2009. 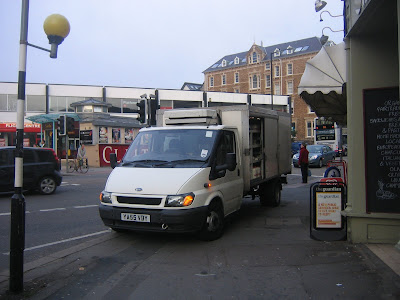 What to do? We had an emergency phone conference with our fellow travellers, the Daily Mail, and a couple of MPs who were courting the Daily Mail vote. And we had an idea. One of the points said "look at the perceived cyclist/pedestrian conflict", as apparently those people who write lots of letters in green ink to their MPs care about this a lot. That's it, the problem we in Bristol Traffic think is the route cause of risk in our streets: bicycles on pavements.

That's it! we said, focus on this, pretend it is the key finding, not that cars speeding through the less well off parts our cities are killing the children, not that there isn't room on the pavements for bicycles or pedestrians on account of all the cars.

We were a bit concerned that the statistics didn't hold up, that nobody in our city has been killed by a bike on a pavement, but we have had people killed this year crossing the road, we have had schoolkids killed on the pavement by cars, we have had cyclists killed on the road. What to do? Get some quotes from the docile MPs who will do anything to get their names in the paper. And we did.

We got the article out the Daily Mail, that was to be expected -MPs call for laws against bicycles, but since the Jan Moir article on Stephen Gately exposed the paper as being a relic of the 1930s, and something to ridicule, we needed a more mainstream channel.

We wanted to appear on question time, but apparently the BBC had already booked their speaker, so it had to be a bit of journalism instead. Which had us worried. Journalism. That means research, insight and writing. How would the BBC report this?

Would they read the report and come down hard against our right to drive round the city at speed, to finish our commute by parking our cars on the buildout by the double yellow lines, here outside the physiotherapy department of the BRI? 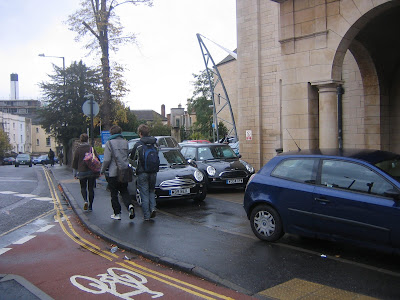 Would the BBC pick on the speed issue, embrace the Bristol Council proposals to reduce the speed limit in the deprived parts of the city? Would they look at the discussion on injury rates, enquire of hospitals what the trends are, and perhaps find some unpleasant facts about that Britain is becoming a more dangerous place to walk around, on account of -dare we say it- the cars.

Fortunately, they went for the MP's quotes rather than even looking at the report's summary This produced some lovely "Target pavement cyclists" headlines and with a consistent "Parliament blames the bicycles" story, even the on-line bicycle press didn't bother to download the report and realise that we, Bristol Traffic, had made the headlines and all the quotes up.

I mean really, how could a respectable news outlet fall for quotes that are straight out of Monty Python? Like this one from Geraldine Smith (Labour), "A police superintendent was at this forum with me and he said that it was legal to cycle on pavements." That is so wrong; the police not enforcing things that aren't actually illegal. Or this one, from Tory MP David Curry, some cyclists were "irresponsible and arrogant road users"? Yes, that is what we want: the next parliament to make being "irresponsible and arrogant on a bicycle" a crime. It will be the first step to banning the two-wheeled terrorists from our streets entirely.
Victory! Success! We, Bristol Traffic, in collaboration with the Daily Mail, are not only writing articles for our own news outlets, we are setting the agenda for the country. Now that the Daily Mail can't be racist, can't blame rape victims and can't be homophobicwithout 25,000 press complaints, attacking the cyclists is the oneluxury the press has left, and we will exploit it to the utmost.

All those bike people that view us as some kind of satire will have a different look on their face now, now that they realise that we are setting the battle lines for the next election. It won't be about financial competence, how to handle the fact that Britain is £270 Trillion in debt and rising, it won't be that the mass employment industries are toast and with North Sea oil declining year on year, we won't have the cash flow that kept us going through the 1980s. The issue that neither party who stands a chance of getting a majority appears to know what to do isn't going to be raised. No, the next election will be about what really matters: bicycles on pavements.

Does your evil genius know no bounds? Even now that you crow openly about the way you subvert the media to follow your reactionary agenda we fools from the cycling and walking campaigns still think that you are secretly one of us.

Is there no limit to our naive credulity you must wonder. At first it seemed that you were merely satirising the Association of British Drivers. But now you display Machiavellian characteristics that should make us all shudder. Nick Griffin is a pitiful buffoon by comparison.

How ironic that even we cycle campaigners, the 'subversives' as you call us, have been so taken in by your subtle machinations to undermine our cause that we continue to give you support and encouragement.

We have our eye on you Chris. And that photo of you talking to the CTC campaigner in a recumbent. How long do you think you can retain a position of power in the BCyC once it becomes clear you are thinking of going "recumbent"? So keep quiet, do what we say, and we won't let the photos out.

I have only just read properly the opening of the Daily Mail article:

"Anti-social cyclists are a potentially fatal hazard to themselves, other road users and pedestrians, say MPs"

Given that cyclists and pedestrians are listed separately in that sentence, the only other "road users" I can think of are in fact car, lorry and bus drivers and passengers. I can assure everyone that whenever I get a bus to templemeads, I cringe nervously whenever we pass a bicyle, thinking "will this be the one that kills me"?