The parking of this vehicle may seem completely random, but as it has a disabled sticker it is allowed to park on double yellow lines. The only issue, then, is why WN07HCX is parked on Elm Lane, Redland at such an unusual angle. It may actually be intentional. 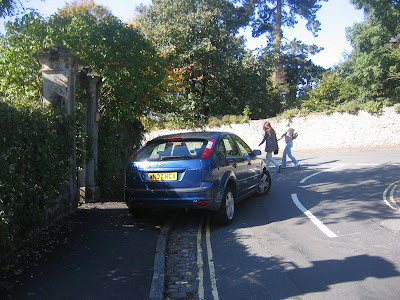 By parking the way they have, passing vehicles can't tell whether or not the car is actually about to pull off without indicating, or is just parked at a random angle on the double yellow lines by the corner. You can't even be 100% sure there isn't a driver in there, not from this angle. This forces any experienced local driver to slow down and pass carefully, looking out for any sudden movements.


As such, it is actually better at slowing down vehicles approaching the corner with Grove Road than the give-way signs themselves are -  signs which used to historically mean "pause and look for passing vehicles" but which will, in the forthcoming 2010 Highway code, be changed to mean "stop texting for a moment".


it also penalises anyone who is not paying attention to the curve of the road, by scraping bits off their vehicle. Again, this encourages attentiveness, and hence safer driving.

Posted by Bristol Traffic at 07:37