The photos have come back from Jessops at last, and one reveals a pic of the car driven by the Redland Mum that caused me so much vexation last Saturday that I had to have a little lie-down and a strong snifter. 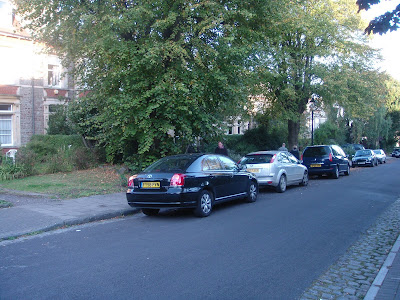 Yes, cyclists should be aware that this black Toyota Avensis FY58PVN, when driven by a woman with "no points after thirty years behind the wheel", may still cut you up to save one second off her drive home to the leafy Victorian suburb of Sustainable Redland.
Cyclists should also be aware, if they swear at this motorist, she may tell you that she "has no time for people like you."
I probably overreacted.
But a different driver in a different car managed to mangle my bike and break my elbow very effectively last year, and I was in such shock that I didn't swear at him.
So I swore at her instead. I have since washed my mouth out with soap.
Posted by Quercus at 07:00

oh, check out any car's insurance. If it's not insured, set fire to it (using lead free petrol. Think of the environment)

I'm sorry, you appear to have mistaken this blog for an anti-car site. We are pro-car and anti-torching. This posting only got published by a security failing in our infrastructure, the author shall be soundly beaten with a metal pole cut from their bicycle to prevent them going off-message again.