Southville Parking posts us this lovely snap from this summer (Summer 2009 was a Tuesday in September, as you may recall), showing how part of the evolution of Prince Street Bridge is going on

A year ago: two lanes for cars, bikes and buses, narrow pavements on both sides. Then, change: the western side/northern direction was blocked off to be bike+pedestrian, while the other direction became alternating all-vehicles. This makes for some interesting options for tax-dodgers who insist on cycling.

Together with Forest Pines, Chris "known subversive" Hutt has shown that the long term plan is driven by Bus Rapid Transit; the eastern lane will have the pavement removed and the route made bus/bike only, despite the inconvenience this will be to the forthcoming 8000 Ashton Vale commuters and people who will discover that Tesco Sainsburys Southville is going to be the best supermarket the city has seen.

What's not been covered is how the rollout will be -will it be one big day when cars are banned from the bridge, and bikes are forced into the road, rather than the pavement? This picture answers the question. 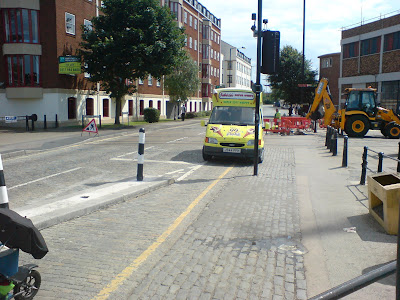 The careful placement of an ice-cream van not only brings in revenue for those ice-cream vans who failed to win the Banksy franchise, it discourages bicycles from using the bike/pedestrian side, and so gets them used to it being taken away. As an added bonus, northbound cars awaiting the green light can buy some ice cream too.
Posted by Bristol Traffic at 07:22

Keep up at the back! Tesco was yesterday. Today (I think) it's Sainsburys.

Never mind Chris "I'm too poor to catch the train" Hutt, it would be nice if you gave me a credit too. After all, I'm the person who originally put that diagram you've got there online, and I notice you're stealing my bandwidth there by republishing it.

@Chris, post was scheduled last week, things change. Updated the posting when I saw it.

Sainsbury's is so this morning.

My man in the boardroom's whispering "Iceland". The talk is that it will have the biggest selection of frozen chips in Western Europe.

What more can you ask for?