ASLs -make cyclists use them

This is the Stokes Croft/Ashley Road junction, one where someone heading in the opposite direction went under a lorry, one of our correspondents heading north had a bit of an encounter with a driver apparently working for A&M Motors. Here, though, it's a peaceful evening.


Can anyone see what's wrong with this picture? 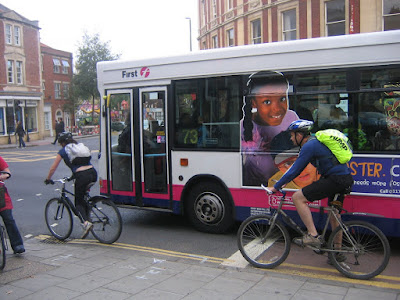 That's right. The cyclist on the left of the shot has cycled past the stop line on the ASL. This means that the FirstBus #73 bus will not be able to pull away from the lights first, and will instead get behind a slow moving bicycle.


As this road is a showcase bus route, it is important to FirstBus that buses get priority over not just cars, but bicycles too. With heavy outbound traffic, only the bus lane will be free for the bus, and if the bicycles get in the way they will force the bus down to their speeds.


If the bicycles respected the bicycle zone of the ASL, they would be waiting behind the bus, but in front of the cars. This would give them a safe zone while not slowing down bus traffic.

Posted by Bristol Traffic at 10:04

What you don't point out (because you're too polite?) is the cyclist just peeking into the left side of the frame. As is typical for cyclists, it appears that she's riding on the pavement (or perhaps parking her 'vehicle' on the pavement) and thus taking up a valuable white-van delivery zone.

yeah, she was in the way of me cutting over to 9-tree from monty too.

A Black person advertising something not related to fried chicken?

Careful, you do not want to piss off bristol with your london humour.

Perhaps these little bits of red painted road should be renamed ABSLs (advanced Bus Stop Lines) so bus drivers know they can use them to get in front of cyclists..

no, the buses and taxis and vans should go in front of the bicycles. They should go to the back of the line, behind the tax payers. We propose moving each ASL about 30 metres back from the lights.