Corner Parking -sometimes you have no choice

There's a lot of fuss about corner parking -how it's dangerous, how some bits of the highway code say you mustn't do it. What does it say? Not park within 50 feet of a corner? Ridiculous. That would never work, not in a modern city. 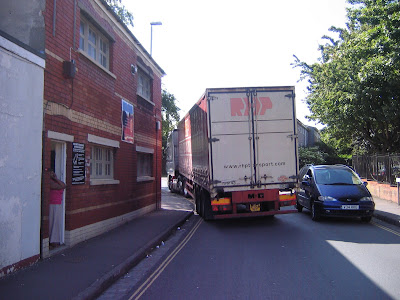 No, sometimes you don't just have to park near the corner, you have to stop completely on it. Yes, it does force traffic to go round without much visibility, but, well, it's not as if you have any choice. Here we are in Easton/Lawrence Hill, at the end of St Gabriel's Road. The HGV is parked on the corner, but because it's articulated, it has managed to stay close to the kerb all the way along. Cars approaching from the north will see the vehicle and pass safely. 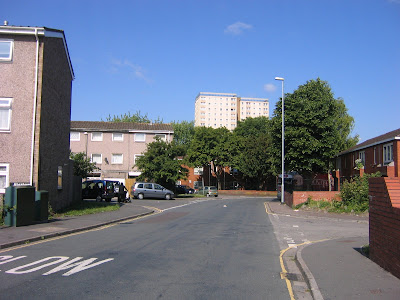 From the south, well, it does appear to be hiding a bit under the trees. But see that paintwork on the road to the left? Slow. That warns vehicles approaching this junction that they should slow down, and so nobody should be surprised to see an HGV parked on a blind corner rather than on the empty road adjacent to the corner.

Update: we forgot to thank RHP Transport HVG DX03XFF for their provisioning of a new traffic calming build-out in Easton. Thank you!
Posted by Bristol Traffic at 07:06

Imagine the countless parking spots that are just sitting 'empty' in our country because of the no parking signs that plague our cities.

the pavements are still an under-used resource, too, though I'm glad to see a lot more blue sky thinking on the ad hoc multifuncionalisation of them going on among Bristol's motorists. This lorry could have freed up a lot of road space if only it had been parked three feet or so to the left.