Poor People! There is hope!

Couple of months back, paul@loop-pr.co.uk commented on a posting, offering a traffic-related news story. Obviously we never followed up anything which would involve effort, though we did see that the company is a media relations company which specialises in taking your brands and making them newsworthy. Obviously, we are ourselves a world famous brand, so don't need to waste money in coverage ourselves, but one of the company's customers is streetcars, the second car-by-the-hour scheme in the city. For some reason Paul didn't ever follow up with a news item, which is a pity, as we are not above receipt bribery. But still we waited.
Today, though, in a bribery-free article, we are show why you should spend the money. 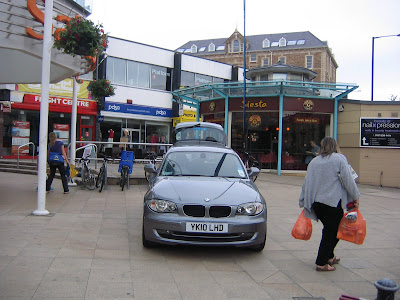 Here we can see the streetcars car YK10LHD making the poor pedestrians of deprived inner-city Clifton feel even less worthy, as now they have to detour around a car in the middle of the pavement. 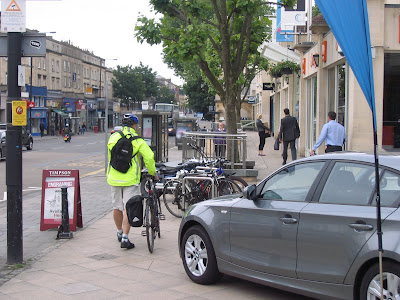 Same for this cyclist, who cannot ride straight up to the bike park, they must instead dismount and walk. 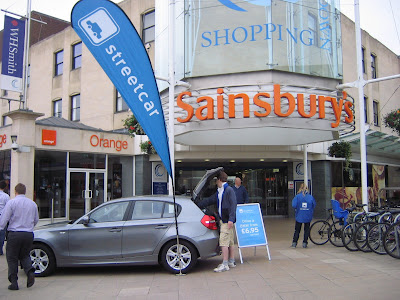 Here though, you can see why streetcar are parked in the middle of the road, taking up all walking space. As well as the underpeople we've seen, there are lots of students in the area, and for about £7/hour they can rent a series 1 BMW, which you can then use to park on pavements! What a fantastic idea! Students: for only £7, instead of walking, cycling, or worse -use public transport- you can have a real car, and experience being an adult.
If there is one flaw here, it's timing. Year end. That means no money. Wait until October, when the loans have just arrived, the credit cards haven't topped out. That's the time to sell the dream.
Posted by Bristol Traffic at 07:00