This week is what used to be half term, before we had six term school years.
Last week was different, which meant that the chaos that is Clifton Mums Hour reigned, twice a day or more, in the vicinity of Clifton College.
Imagine the scene... a lone cyclist in College Road trying to get to the Downs vs a Clifton Mum in a car. A no-brainer. Cars parked both sides of the road, no space, and at least a 5 second shorter journey by car. If I were a Clifton Mum I certainly wouldn't let a cyclist hold me up. I'd cut right in front of them and slam on my brakes to let another car park. Or, 5 seconds later, I'd pull right in to the kerb and stop at the zebra crossing, blocking the cyclist again. Ha!
Then I'd hack it off up the road before the cyclist catches up - and park up on the yellow zig-zags outside the school to set a good example to my children, which is what the driver of WR57AXW did. 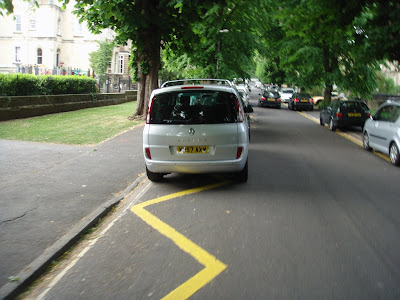 So if you nip down to The Avenue in Clifton at about 15:00 this week, this chaotic scene will not greet you. There will be no cars parked on yellow zig-zags, no cars on the pavements, and nobody daring to park on the double yellow lines. Give it a week or so though, and you too could join in with the fun, like this:
It's important to note that EK59SDX and WR57AXW are very important people, so are allowed to park their cars on the zig-zags, whilst WM09CZA is probably an actual VIP, as shown by the flashing indicators.
Lesser mortals, such as Range Rover LTP321, WU56TZV, MJ55FUV, WR03AUJ, LB55UHH, WR58WSN, MA07HNL, VN02VUL, WJ58YBB, RO51LOD, KN07PID, XHY1 had to park on the double yellow lines and pavements. They were not alone, but our database will explode if we record many more.
Only T59SAE manages allow pedestrians access to the pavement by staying firmly on the double yellows in the road. Kudos.
Our advice: don't have strange haircuts in Clifton during term-time.
The Stepford wives of Clifton really don't like it.
Posted by Quercus at 07:00

The Highways Agency is currently developing a GM hybrid of Tarmac and quicksand exactly for this purpose. Solid as a rock when you drive over it or pause for up to 20 seconds, but turns to sludge if a tonne or more of weight is applied for longer than that.

Luckily we have this new Philip Hammond chap on our side to make sure it never gets used.

Bristol Zoo let the parents -not just mums- park in their zoo car park at the top of this road for pickup and dropoff. Every parent parking in the school keep clear zone or on the double yellow lined area is not doing it as there is no alternative (compare to Christchurch school round the corner) but because they are lazy, running late, or just don't care.

This road is the best argument for Bristol Parking Services to do drive-by ANPR-vehicle ticketing outside schools I know.