What is going on??? Bristol Naked Bike Ride??? Who's idea was that?
I wanted to buy a new Top Gear DVD last Sunday, so I set off in the Range Rover for Cabot Circus, only to be confronted by this... 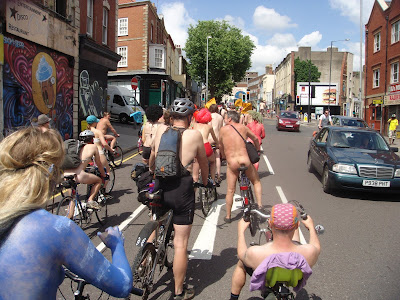 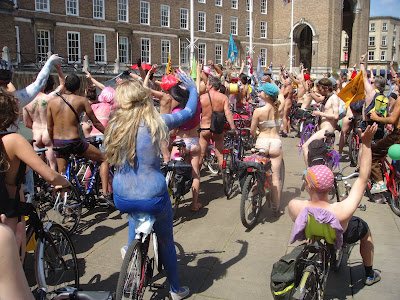 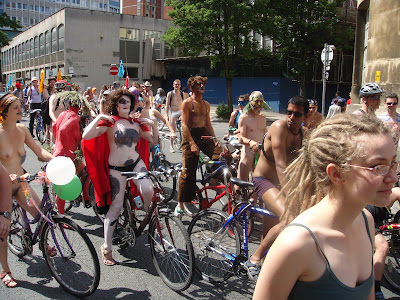 Mrs Quercus was proper embarrassed, and the children didn't know where to look...
Not only did these filthy tax-dodgers seriously hold me up between traffic lights, but they also offended many, many shoppers and other proper tax-paying car users, who were so incensed by the spectacle that they had to take photos of the event on their mobile phones.
I'll bet it's probably all over Flickr and Youtube by now. Disgusting. 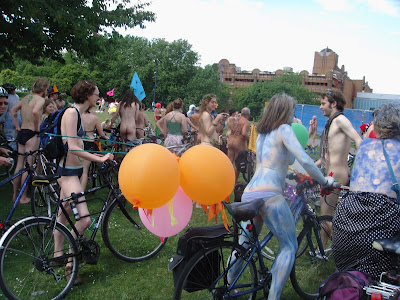 What is the world coming to when these hippy outcasts with their anarchist, lifestyle changing attitudes think they can ride around naked and avoid paying VAT by not even buying clothes? Isn't it illegal to expose yourself in public?
Apparently this whole charade was just to highlight the vulnerability of cyclists on our roads, and, worse still, to campaign for Car-Free Sundays in Bristol city centre. Just plain wrong.
Despite dialling 999, no police turned up. At all*. Not even outside Bristol Cathedral, or our beloved Council House.
I am livid. I'll be contacting the ABD to ensure this doesn't happen again.
(*except, possibly, the guy on the motorbike?)
Posted by Quercus at 07:00

Think the guy on the motorbike was a fireman following the nudie cyclists and calling in his mates to come and cheer them on in the city centre
there was a lot of unnecessary whoop whooping on the sirens going on !

Quercus,
I understand your concerns. Will you be back there next Sunday and every following Sunday to make sure that these VAT-on-clothes-dodging cyclists aren't coming out again?

I certainly shall, between giving driving lessons to my six children, and paving over the rest of the front garden so they can park up outside.

also, why aren't the pics available at higher resolution?