EP concerns: are they becoming pro-cyclist?

We're a bit worried about the Evening Post this week, after they published an article criticising a white van for failing to stop after knocking a cyclist off their bike on the St Pauls roundabout. 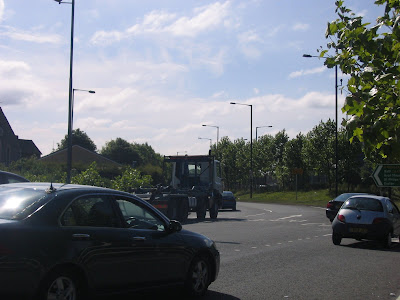 All we can say here is that it is fortunate that the E.P. commenting team managed to point out the obvious: that most cyclists are law-breaking criminals, therefore the statement by the cyclist is probably untrue, and even if it is, they deserved it.
What nobody seems to have picked up on, here on the St Pauls roundabout itself, is a new sign that you can just see in the distant verge looking towards the Lawrence Hill roundabout: the speed limit on the dual carriageway has been dropped to 40 mph. This not only adds to our journey time, it will encourage more cyclists to try and use the road, to try and cycle across this junction -which it is clearly not safe to do! Lowering this speed limit on a busy motorway approach route will only encourage non motorised traffic, and so endanger them.
What's even worse, when an article showing how Gary Hopkins, our new council cabinet member for transport had to park at a bus stop to nip into some shops, some of the commenters actually criticised Gary, even though most -rightfully- blamed passing cyclists.

The fact is, if you drive round the city, the only short stay parking places are the ones where it is not technically legal: the double yellows, the bus stops, the school-keep-clear zones, the ambulance-only areas, the zebra crossings. Anyone who drives round the city, who tries to contribute to the local economy by nipping into shops or pubs on the way in or out knows that. Yet the E.P, rather than say Yes! We have a man on the inside! Finally someone who understands our problems! they criticise him, they say this is wrong, he should stop it.

We just think we should say that. So we can say that we were first when the T-shirts using these slogans appear.

Now, here is where it gets weird. After the denouncement of Gary went up, all the commenters started blaming cyclists or even joining in the denouncement -yet now those comments have gone. All of them. It's as if nobody ever said anything on the topic. They have been uncommented. All that is left is a couple of letters on the letters page, both of which blame Gary, rather than the failure of the city to provide short-stay parking by our cities newsagents, off-licenses and takeaway outlets. What has happened? Why are those people who dare to say the truth being censored by the E.P?
Posted by Bristol Traffic at 07:37