Down in the People's Republic of Stokes Croft the unwashed masses didn't seem to like the idea of a new Tescos earlier this year. Which resulted in scenes like this: 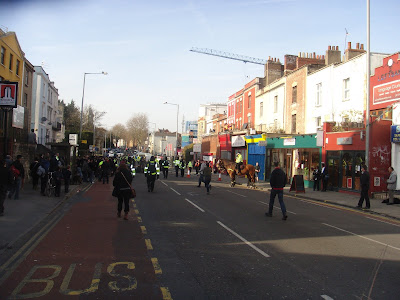 And massive congestion in the surrounding areas such as this, as Police closed a major thoroughfare to evict the squatters (the Redland Mums didn't know what to do): 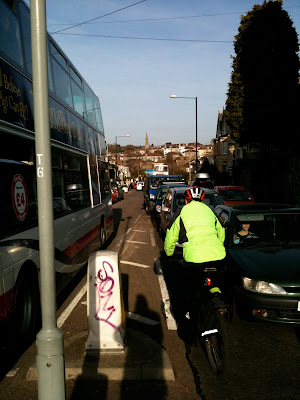 However, further up the same road that Tesco intend to inhabit, where it becomes Gloucester Road, the residents are far more subtle when it comes to Multinational Invasions. Let's not question the need for another 'Local' or 'Express' or 'Metro' type supermarket here. After all, Gloucester Road is the last great British High Street, but why should we be concerned if Next or Primark or Currys or Superdrug move in and take over from the Bread Store, or T & Pa Murray, or even Totally Toys?

No, north of Stokes Croft and Cheltenham Road they're all too middle-class for that. Have a close look. Not an anarchist in sight, but do you notice the squatters?

Yes, that's right, T1GFM and P217GVB are blocking access to the proposed site without any need for trustafarians, police horses or road closures.

Whilst Bristol Traffic generally endorses pavement parking, we don't feel we can take sides between Tescos and Sainsburys.

Let's just hope it doesn't become another bicycle shop.
Posted by Quercus at 07:00