Remember how only a few weeks ago we wanted to turn the back bike path to abbeywood into a proper road. There may be some good news there.
First, note how the bike barriers are down. 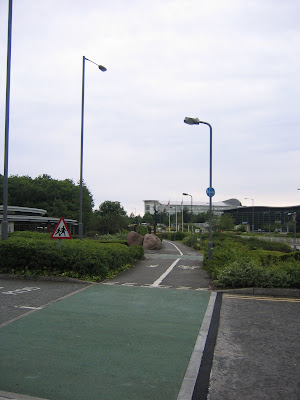 The fence to stop cyclists dodging the barriers now looks lonely, the path put in by people dodging the fence may even recover. 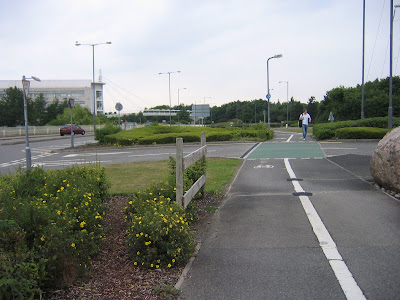 The cyclists may be happy, but not all. Not Clive, whose email we picked up.


I was amazed to see a car coming down the MOD Abbey Wood Cycle path (between the gated end of the lockleaze rugby grounds and the MOD gatehouse.


The Driver, Mr Blair, was quite upset that cyclists were impeding his 'Right of Way'.
Mr. Blair apparently lives in the house at the top of the path and claims that the route past the MOD has been 'his' right-of-way for 300 years .


When I arrived at the scene, he was arguing with a student who he claimed was blocking his way. During his 'discourse', he caught a girl with his car door as she tried to get past.
Not a happy chappie.


Now, he may indeed have some access right to his property via the cycle path ( I don't know, only S. Gloucester Cncl. can answer that) but does this mean he has vehicular access via this route?


If he does, than S. Gloucester should signpost the track to warn cyclists and pedestrians that it is a shared thoroughfare, as most people will not expect to find cars on the path.
(travelling at the national speed limit)


How do I go about progressing this (from a safety perspective) to find out if Mr Blair is allowed to drive his car through this section of the cycle path, and if so, ensuring cyclists and pedestrians are aware of the danger. 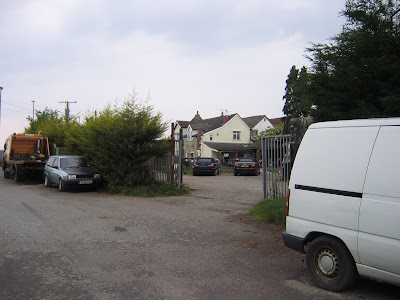 This is interesting. It's why we put the maps up last week. First, let's assume that the Mr Blair is the person by the rugby grounds who has an interested in old vehicles, many of which without tax or insurance. Driving them on private roads is the only thing he can do.

The MoD roads on Abbey Wood are private, so if he has a historic right of way to get there then yes, he can drive down the bike path. That way he can drive his old cars without all the pesky government regulation, health and safety nonsense about seat belts and brakes working. Road tax, that stuff.
One funny thing though, which the maps raise. Does the right of way extend to access to the MoD roads, or does it go to the woods and hence to the HP site, which has been fenced off since the mid 1980s? Is his claim for 300 years access is right, by our estimate this would put them within 50 years of end of the English civil war, some time before the Jacobite rising in Scotland, and therefore possibly predate Britain coming into existence.  As ancient as nine-tree hill.

If there really is car access on this path and to the MoD roads, then it shouldn't just be a luxury for one person. No, it should be something we can all enjoy: a new road between the A4174 Ring Road and Lockleaze, an alternative to the always congested, speed-camera enabled Filton Avenue.

More investigations -and maybe some experiments- are needed.
Posted by Bristol Traffic at 07:43