10:00 on a weekday morning and the MOD Abbey Wood car parks are full. Really full not as in "I can create a space at the end of a row" but full as in "site security have blocked the entrance and are standing outside, possibly armed." 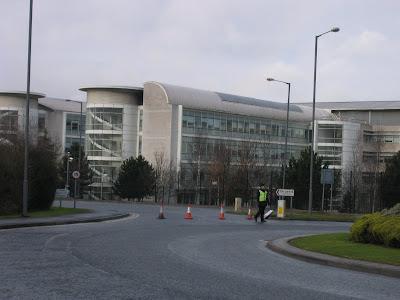 These might seem a lot, but they all involve effort, and they don't substitute for the presence of the A4174 ring road, the A38, which is dualled from the M4/M5 interchange all the way down to the ring road, and the M32 a short distance away. S Gloucs commuting is optimised for cars. Except the haven't provided enough parking, not since the MOD expanded their staff here from January 2010. 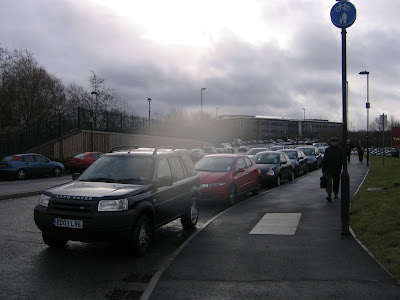 Fortunately, there is a bit of space round the corner. Up until December, this was an empty dual lane road leading to the ill-fated "tailspin housing estate", housing for the 21st century, and what's left of HP. Now it has found a new use. Overflow MOD parking. 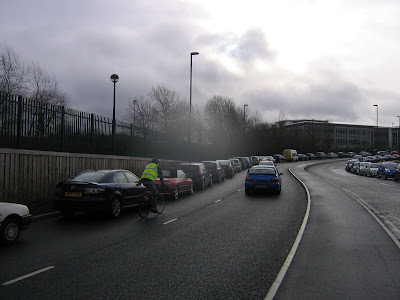 For those people cycling to HP, this is beneficial as it turns the slow lane into a bike-only lane. Well, until the end of course when the cars turning left are now in the lane to your right. 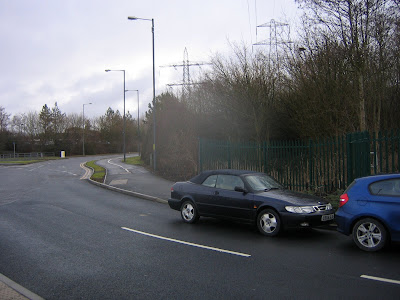 For people trying to use the bike paths between abbey wood and UWE, not quite so good. The kerb dropoff they used to use is an invaluable parking space that saves the first person to grab it five minutes of walking. It is a premium location, and not double yellowed or anything to imply its use  for parking is somehow forbidden.

We are disappointed, therefore, to hear news that the S Gloucs. Parking Team/MOD police were on this road the very day these photos were taken, ticketing this Saab S904SLK and vehicles further up the hill, the ones parked on the roundabout. Do the parking officers not realise that once these commuters have driven into the area, there is nowhere else for them to go! They had no choice but to park here! They would have liked to use the MOD Abbey Wood Car Park B, but the traffic cones and enforcement staff forced them up this back road, adding time to the journey and now the risk of being ticketed. This is persecution of commuters in the cars-come-first part of the city.
Posted by Bristol Traffic at 07:37

Unbelievable. Well, perfectly believable, but you know what I mean. I wonder which genius first came up with this wheeze?

Dont forget the villians at the council that wouldnt allow the MoD to expand the parking provision at Abbey Wood. I could understand it if the council were trying to push a park and ride scheme...but they arent. Their "green" solution is to simply limit the number of spaces allowed on site. By Apr 2012 there will be 10,000 people working at Abbey Wood...it's only going to get worse.