The Ministry of Defence is cramming an extra four thousand people on its site at Abbey Wood (up from 6,000 to 10,000) by building a new office block and creating new 'Flexible Workspaces' (that's hot-desking to you and me), as a consequence of this and their policy of encouraging people to drive to work by paying them a handsome mileage allowance, the MoDs two huge car parks now don't have capacity to accomodate all those who want to drive. This means roads and car parks in the vicinity have now become full with MoD parking, including on the newly built access road to the Hewlett Packard site - since they flogged their entrance to UWE. 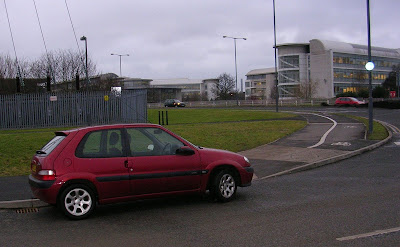 The owner of this Citroen Saxo, W797OJH thought they'd found a nice free car parking space for the day and parked across the dropped kerb blocking the shared use cycle and footpath, but what's this? The Ministry of Defence Police have issued them with a ticket! What are the roads for if they are not for parking on? Why can't cyclists get off and walk around cars parked in their way? 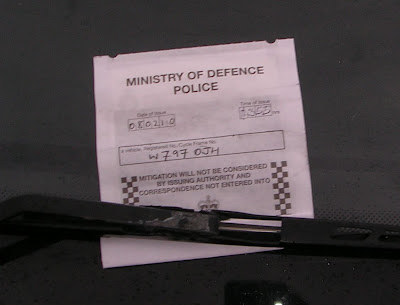 If there is one redeeming feature, the MOD parking tickets -which may not be legal on this bit of road- also have space for "cycle frame no". This makes up hope that if more than four people cycle into the MOD facility, and park somewhere other than their two sheffield stands, those cyclists will also be fined.
Posted by Bristol Traffic at 07:52