Can buses park in bus lanes?

If you are one of those losers who actually buys a parking ticket for the city centre, you will see a warning on the back saying "people who park in bus lanes will get ticketed now", as the buses have CCTV and can photo cars for ticketing later. Whoever came up with the idea of these adverts must have thought "We want to communicate the news with people who park in the bus lanes, what better way than on council paper they get when they buy parking tickets?" Sadly, whoever thought that missed the point: one of the benefits of parking in bus lanes are that you don't have to buy parking tickets. It's cheaper, as well as more convenient.

Presumably they will have to come up with some alternate plan, such as issuing tickets. For now, warnings.

Question is, will it work? The first step would be for the council to collect a month's worth of parked car data (registration, timestamp, location), then try a month of adverts and no enforcement to look for changes, then try actual enforcement. We aren't going to help with the data collection, -not rigorously-, but having a suitably anonymised dataset would be interesting to play with, and we may help with the analysis.

For now though, a legal question. Here in Lewins Mead on a Saturday morning, the bus lane is blocked by a parked vehicle. Passing buses -you can see two here- are forced into the main traffic lane, and the bus picking up passengers behind the parked vehicle will be forced to wait for them to get past before it can pull out. This selflishly parked vehicle is impacting on bus timetables, as well as the flow rate of all motor traffic in the city: not only can the buses not use their lane, they take up space in the open lanes. 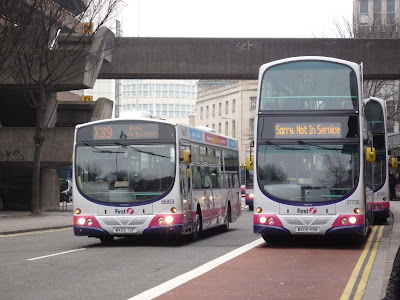 We have a question then. Is it legal for FirstBus to park buses in bus lanes? Because by doing so they are not only impacting their own schedule, they are impacting all other road user's schedules too?
Posted by Bristol Traffic at 07:46

I wonder if this really is a First Bus...

It could just as easily be another ruse by that famous taxi driver Noel Edmunds to retake control of the roads for the average man (with free city-centre parking thrown in).

oh, good point, good point. Even less people would try and stop a firsbus bus than wave down a taxi