It is grim in Portsmouth. More than usual. Not only is their football team in a financial condition roughly on a par with the UK government, the fact that the UK government needs the income tax from the footballer's salaries to keep the country on a slightly more even keel may be enough to kill the team altogether. The council must be glad they didn't commit to joining in the world cup bid, unlike some others we could name. 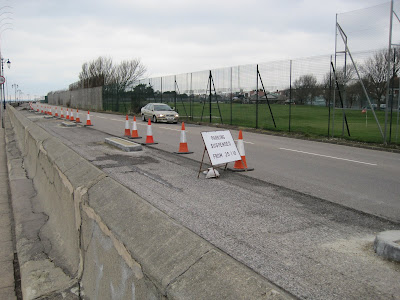 This is the echelon parking scheme which would let you pull up and park, watching the sea while you sipped lukewarm tea from your flask. The British Way to enjoy the seaside. But not now, not here, in a cycling town that sadly, finally, appears to have embraced cycling. Last time we visited we saw how some cyclists were ignoring the no cycling signs and enjoying their tax-dodging lifestyle on the wide pavement, but at least sometimes that was enforced, and the council had come down against legalising it.

But what they have done here is worse. 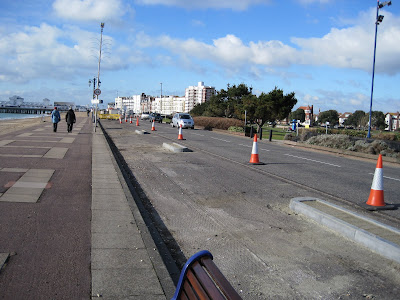 Rather than simply let the bicycles and pedestrians battle with each other, they are going to put in a segregated bike lane along the entire waterfront, and force cars to park parallel to the kerb. This will stop us parking our cars and looking out to see -which is the only reason we drive all the way down to Portsmouth in the first place. 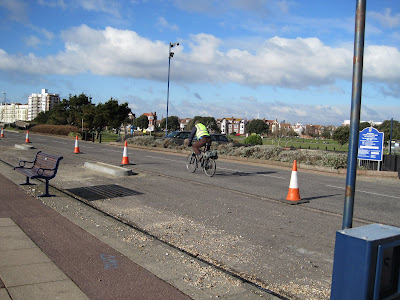 Cycling along waterfronts in cold, biting weather may be a tradition in the Scandinavian countries, in the Netherlands, North Germany and Denmark, but not in Britain. We like our cars, we like our flasks of tea, and we need to park facing the water.

You can see the reaction to this in the local press. We draw particular attention to the NobodySpecial of quotes #15, 17 and 20, whose opinions match our own and draw out how much of a loss this will be to our seafront.


"I don't often get out of the car because either the weather's not suitable for it or I can see everything I want to with the radio on and in the comfort of my vehicle" .

"I am against making a change to the seafront which will remove scenic parking and also 150 spaces just so cyclists can cycle along an official route. It's significant detrimental to the enjoyment of the view by a significant number who drive there."

We do agree with this poster, though the thought of demolishing Portsmouth does have some appeal.

To close then, a video pointed to us by Drusilla Marland: the closing scene of that 70s classic rock opera by The Who: Tommy. Filmed on the Southsea seafront, it will immortalise parallel parking there; remembering the freedoms we had until the council came took them away. It will serve a reminder of an innocent Southsea the way Our Man in Havana records pre-revolution Havana. Two great cities, two classic seafronts, both ruined by politicians with their dreams of benefiting the little people.

We were free then, but not any more.

(photographs contributed by "A", a resident of Portsmouth).
Posted by Bristol Traffic at 07:52