And so to the Portsmouth seafront, centrepiece of a cycling town. Here we see it on a sunny Sunday in May, full of pedestrians. 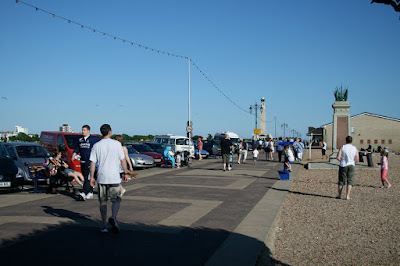 And, oddly, bicycles -despite the no-cycling signs 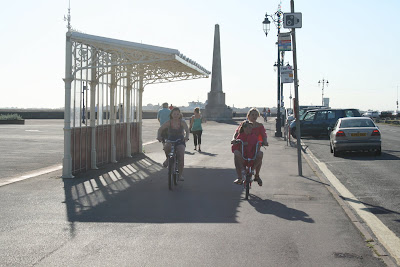 These two-wheeled terrorists are scaring the pedestrians as they pedal past at 6 to 10 mph. 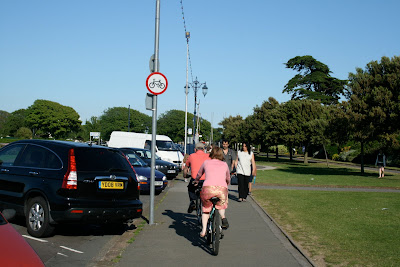 Later on in the day, some teenagers go down carrying fishing rods, out enjoying themselves at the expense of the pedestrians, who are forced to walk slowly for their lives 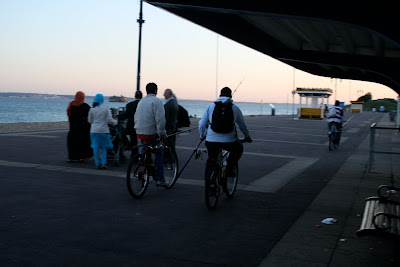 There had been some proposals to open this path up to cycling; in a survey, 3000 people voted for this, while only 1000 said no. But that survey was an abuse of democracy, as pro-bicyclist pressure groups round the country clearly manipulated the vote, as it came out so strongly in favour of allowing bicycles on this path.
Fortunately, the leader of the (LibDem) council stood up for the pedestrians, and overturned the proposal to provide a safe cycling route along the Portsmouth Seafront.
Now the same council is left with a problem. As part of their Cycle-Town funding, they promised a bike route here. Either they give back the money, or they come up with a different solution. We propose putting up a no bicycle sign on all routes into the city, making it a no-cycling-city. This will reduce conflict on roads and pavements.
Posted by Bristol Traffic at 06:54

When I was a student in Portsmouth back in 2001-2002, I think I remember (safely) cycling on the seafront / pavements without (too much) trouble from the police.
Has cycling in Portsmouth so much increased (good!) and become "mainstream" so it's now a proper subject for law enforcement ? :)

No cycling has not increased there, yet more people have moaned about them in the local press, etc. But yes, perhaps they should pay the money back.