This is Gunwarf Quay, Portsmouth, their shiny new shopping centre -an equivalent to Cabot Circus, albeit one with more outlets.
What is this seen by the harbour? An area which could have been used for premium bar tables dedicated to bicycle parking? 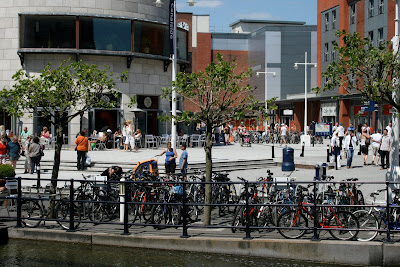 And its used too. Something about a highly-visible place to park your tax-dodging toy vehicle encourages people to cycle there and park their bicycles. 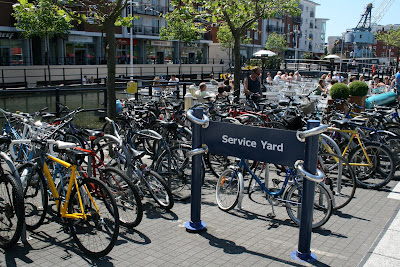 There is even a sign telling the owners to lock their bikes up. 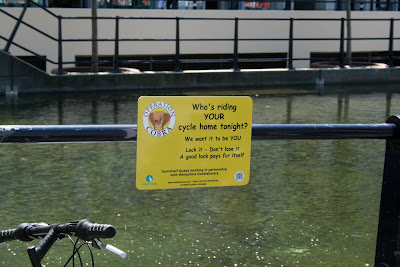 Given this area generates no parking revenue, and removes revenue earning space from outside bars, cafes and restaurants, you have to look carefully at it to see if it makes economic sense
Against that
There is probably a spreadsheet you can write to work out the numbers here: how much space to dedicate to bikes, which comes down to revenue earned against revenue lost. A key aspect of this spreadsheet would be one conclusion

If you have space in your car park, and people choose to cycle instead of drive, you are losing money -unless they spend the money saved in fuel and parking in your shops.

That is, it only makes sense to dedicate space to bicycles if it brings in extra customers, rather than diverts customers who would otherwise pay the hour to park. As Cabot Circus has 2500 spaces, it fills up less often, so there is less benefit in providing cycle parking.
Of course, the other factor in the equation is the revenue-per-bicycle. If bicycle parking encourages poor people to visit, then unless you get lots of them, each spending a small amount, you don't gain much. Same for pedestrians.
In Portsmouth, they've clearly concluded that the cyclists bring in enough money, that they should be welcomed. Though not if they cycle along the seafront...
Posted by Bristol Traffic at 07:54

Interesting point about cyclists consuming more food and drink to fuel their cycling. I reckon that typically cyclists spend about as much on 'fuel' as they would driving, especially two or more cyclists who might otherwise share one car.

It's a complicated calculation because you have to take account not only of aditional food/drink consumed because they are cycling buit also sustenance required due to the greater length of time spent travelling a given distance.

But if you take account of the benefit of the exercise and the time/money saved by not needing other forms of exercise, e.g. by going to a gym, then cycling shows substantial savings over driving.

Chris, I'd say it takes me less time to cycle to the town centre than it does to drive. In fact I know this to be true as I've often cycled home after spending time with friends who have driven and been back well before them. I also find it a lot easier to eat peanuts while driving than cycling and we all know how energy packed they are from having set fire to them at school.