The Pavement is So Hot Right Now!

It's official. What once was a rare and daring manoeuvre, parking up the pavement, has now become an everyday activity and the officially accepted way of parking. To celebrate the dawning of this new era in parking, teams across Bristol are forming to show off the many styles and approaches to this groundbreaking new pastime.
Pictured here on Victoria Avenue we have a stunning display of Synchronised Pavement Parking from the beautifully co-ordinated team of elegant white vans, EU03ONX and 1946BSK. Support for this new craze is widespread, with this particular team being sponsored by Garden Doctor, The choice for the Green Gardener. 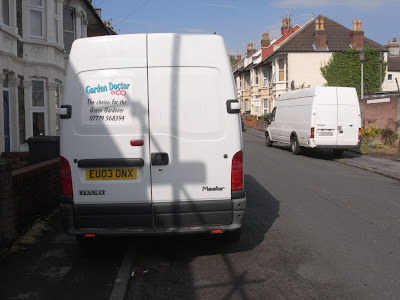 There's no prizes been awarded yet, but rumour has it that these two stand a good chance of being eligible for the coveted Yellow Sticker, a highly regarded award that that has been known to cause quite an overwhelming outburst of appreciation from previous recipients. I'm informed that this team have earned themselves extra points by leaving enough width between them for two cars. On a normal two way road this is something that wouldn't really be noticed by the judges, but performing such a daring feat on a one way road places them at the top of their game. I'm told that extra consideration is also given for the narrowness of pavement left for pedestrians and pavement users, because as everyone knows a slower pavement user is a pavement user more likely to have the time to fully appreciate this outstanding display of talent and technique. 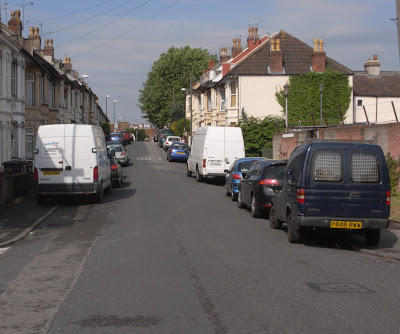 Now we know there's those of you out there that say this pavement parking is nothing new, change the record, it's boring, but you're obviously not noticing the subtlety that takes it to a whole new level. You have to keep an open mind about these new trends. You have to keep your finger on the pulse. Don't close yourself off to these new horizons and possibilities. United we could really see events and celebrations like this blossom. This could be the thing that puts Bristol firmly on the map, a bit like Cabot's Circus did back in 2006. Who knows, before long we might even be enjoying events like the Double Yellow Dawdle (top points for the smallest purchases made while parked up) or the Speed Limit Shuffle (witness the magic as teams of illusionists transform areas that you previously thought had 20mph limits into 30mph and even 40mph zones).
Together we can do it. Together we can make Bristol a Parking City!

To be strictly accurate its not one way the whole length of the road - just the 20 feet at the end by Cobden Street.

SB: It needs to be 2 way the whole way up so that pushchairs, wheel chairs, mobility scooters and sight impaired pedestrians are ok passing through in the road on their way up from Cobden Street, because they're sure as hell not going to be able to get along the pavements on either side by the looks of it.

This used to happen on one of my local roads until a lil lad on a bmx rode past one day and knocked a load of wing mirrors off. :-o