Crap Cycling and walking in Waltham Forest -which we only keep an eye on to make sure that Boris is doing a good job at keeping those tax-dodgers in their place- is picking up on the threat that cyclists on mobile phones present.

Our thoughts exactly. There should be laws against this kind of thing, and if the cyclists are not going to obey them, car drivers should be allowed to enforce them, vigilante style, probably by overtaking them then braking suddenly and turning. 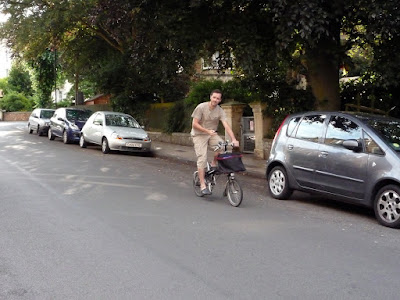 Here we see someone on the phone on a quiet empty road in Clifton on a Saturday afteroon. The greenery are something that has been causing a problem recently, as apparently the street lighting is poor. The greenery makes the streets darker and more edgy here than in say, tree-free inner-city areas like St Pauls or Upper Easton. With the reduced lighting and the illusion of green and pleasantness, the risk that a pedestrian will blindly step out in front of a cyclist is increased -it is far more likely than on a busy main road. Yet this man is making phone calls while going along, instead of wearing the high-viz clothes what would attract the attention of pedestrians, or a helmet to reduce the damage he causes them when they step out in front of him.
If these subversives had vehicle numbers, we would be able to report them to the police, instead of being forced to stick our head out the window and swear at them as we drive our landrover discovery past at 40 mph while taking these photographs one-handed.
Posted by Bristol Traffic at 07:17

I think Boris is still in too much shock to do anything about anyone isn't he since his near death cycling / HGV incident?
http://www.guardian.co.uk/politics/2009/may/23/boris-cycling

yeah, good video that. Glad he lived though, I'd hate Boris to become a martyr.

What is he riding? His Mother's bike ROFL!!

Any bike that doesnt get stolen or stripped down for parts is good. I am trying to make a bike of mine cheesier for this -thinking of a basket and inner tube wrapping of all frame parts. Otherwise, some "halfords apollo" stickers, maybe.

Doesn't he know he should be using hands free and have headphones. That way he could enjoy some pleasant music in between calls as he's cycling. I always find that makes for a much calmer ride with the music drowning out the noisy car horns etc.