Persecution and voting in Kingsdown

Not just a threatening note by an angry a neighbour, but a genuine police ticket, here off Somerset Street, Kingsdown. 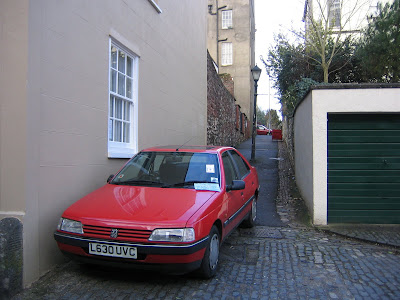 This is not a parking lot! you are blocking a public right of way. Please do NOT park here again 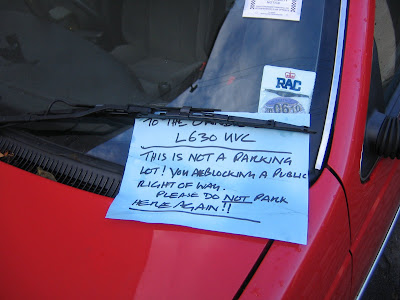 By Montpelier standards, it's hardly noticeable. Interesting how different parts of the city have different conventions.

This is Kingsdown, an area which may or may not have voted for a Resident Parking Zone.  Charlie Bolton says the vote came in at 200 against, 203 for,  though it appears to depend on where you put the boundary -presumably this area, "Darkest Kingsdown", is the bit that came in for it. Bristol 24x7 has some different numbers, ones that put the turnout at 18%.

For those people who didn't get invited to vote, it was by paper or online, every household got one vote with a specific login/password to prevent outsiders voting, or insiders voting more than once. An 18% turnout has to reflect pretty badly on both sides ability to get the voters out.

Cliftonwood: strongly against. Perhaps the parking problems there are due more to residents than commuters, and they felt that restricting their own vehicle ownership and use was unwise.
Posted by Bristol Traffic at 16:31