The printed press has coverage on council plans to crack down on pavement parking.

As with many of the commentators, we think cars are forced to do this as it is the only way their owners can park right outside their house and still let emergency vehicles past. What the council should be cracking down on is bicycles on pavement, as they do have a choice, yet they choose not to.

As well as cracking down on pavement blocking by bikes, we probably have to go for all forms of exercise equipment.

This stationary cross-country ski machine on Cobourg Road, for example. Not just making it impossible for pushchairs to get past, it will make it hard for cars to get down this road. Unwanted Christmas-present exercise equipment abandoned on our streets is one of the great plagues of the inner city! 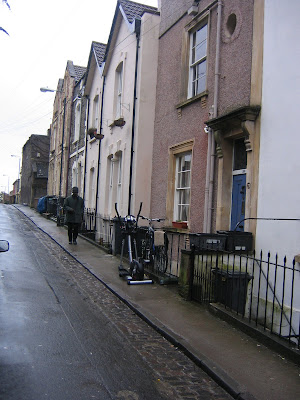 Do we hear the councillors cracking down on this? Not at all.

Incidentally, that E.P. article has a comment by our favourite commenter, James Carmichael of Highridge, who thinks bicycles should be banned from the city and was proposing a bit of aggressive driving to make that clear. Today he complains that it is the bicycles that force him to park on the pavements.

Once again, drivers get penalised while cyclists get away with riding on the pavements, harassing pedestrians, running red lights, being abusive, ... need I go on? It's one rule for the law abiding majority, but no laws for the selfish cycling few. Until the city council can guarantee that my car won't be damaged if I leave it on the road, I will continue to park on the pavement and will see them in court if they try ticketing me.

Oddly enough., bikes are not the vehicles that damage cars parked on roads in the inner city. It's usually other passing cars. The problem with bikes is that they clip the pavement-side wing mirror, and sometimes when you open your door they swear at you for hitting them.
Posted by Bristol Traffic at 07:44

"Until the city council can guarantee that my car won't be damaged if I leave it on the road, I will continue to park on the pavement"

So damage on the pavement side doesn't matter then? Wingmirrors do seem not to be fixed on properly on that side, as often when I pass cars on pavement, squeezing past ever so carefully, they do. Manufacturers should look into this.

If you park far enough in on the pavement pedestrians can't get past. The only time your inner wingmirror is at risk if if you give the pedestrians room.