We are too lazy to go there ourselves, but Chris Hutt did our bidding and cycled (sorry, we will beat him soundly later!) to get some pictures of the Zetland Road/Gloucester Road nomination for our anti-bicycle awards. First look how this cyclist is riding without a helmet, and to the left of the designated cycling area. 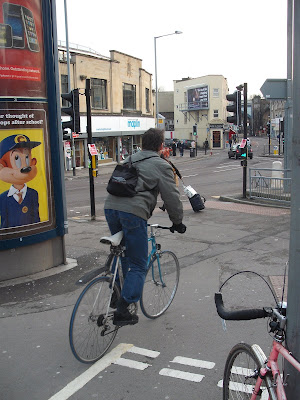 That said, it is kind of ambiguous what bicycles are meant to do at this give way point? Ride, dismount, or get fined by the police. This is the junction where the police were doing exactly that way back in 2008, and it is still an issue at the local PACT meetings.

The cycling rules are clearer at the junction, where you can see the green light saying it is OK to go forwards and onto the A38, hoping the cars coming off Zetland Road aren't turning left towards Cromwell Road at the time. 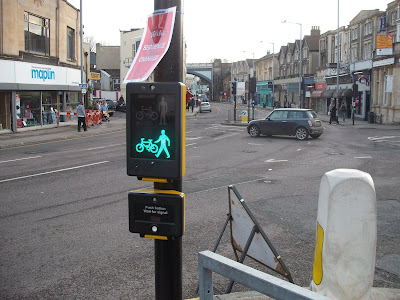 Which today, at least one car is. Fortunately the cyclist was slow and did not get in the way, as they rarely have third party insurance, and it would be a complicated argument over liability at this junction. Normally if a car hits a bicycle running a light: the bike's fault. But here, the green light says go. So damage to your front bumper might be something you have to pay for yourself. 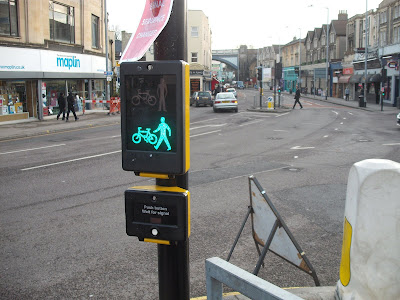 What say the council? As part of our anti-bicycle awards, we want to make sure the winning feature is not some transient accident which will shortly be fixed, but is in fact a deliberate design decision, implemented according to the plan. It looks good here.


Here is the answer from Adam Crowther, Head of Traffic Signals.

"The sequence was changed recently to improve capacity thereby reducing the cycle time and reducing delay to pedestrians. We have also introduced SCOOT to better coordinate the signals.

This was a minor change to signal timings so we did not go to TAA as there seemed little point. I can understand that this is not perfect for cyclists but I do not feel it is particularly unsafe as cyclists have good visibility of right turning traffic and can merge in with it.

Signal priorities/sequence changed signs have been erected around the junction to inform people that the sequence has changed.

Whilst in hindsight it would have been beneficial to inform cycle stakeholders of the proposed changes I do not think we would have changed our proposals in any significant way. There are significant benefits to all users of the junction aside possibly from cyclists from Elton Rd. Buses have seen significant improvement in their reliability and after the changes all buses were running on time between the St James Barton roundabout and this junction. Similarly as the capacity has been improved the cycle time is lower and pedestrians experience less delay. It is also likely that rat running will be reduced over time due to the increased capacity. Cyclists have also benefited on most approaches due to the increased capacity and shorter cycle time. In particular the outbound Gloucester Rd movement receives significantly more green time, this is a movement heavily used by cyclists.

I apologise for not informing the cycle stakeholders but we did not consider this a significant change. The benefits to all road users including cyclists are clear. There are no similar signal phasing changes planned in the near future. Let me know if you need any more info.

This is wonderful, the best quote yet from one traffic planner who is clearly on our side.
Lovely. The best bits come when you think about cycling city. This contraflow, Elton Road, is the primary route for people from Bishopston, the target cycle city community. This change makes it clear that these people shouldn't think about cycling in, they should use a bus instead. FirstBus 1, bicycle troublemakers 0.

This is a showcase bus route remember? And the council's side of the cycle city funding was to come from dual-counted bus lane improvements as well as s106 building development funds. Which means any costs of this improvement may be something we can bill the bicycles for!
We are hoping to get some feedback from UWE about their feature, to round off the pre-award event. In the meantime, can we thank Redland People for their coverage of our site, but point out that we do not consider ourselves local cyclists. They are missing the point entirely. Yes, some local troublemakers like Chris Hutt may be complaining, but Bristol Traffic? We celebrate the irony of a junction where the police have been fining cyclists for cycling through red lights having the signals changed so that cyclists have to cycle through red lights. We relish even more the delicious thought that not only does this stop anyone from Bishopston, the cycling city target area, wanting to cycle into the city, costs related to this junction may be billable as part of the council's contributions to Cycling City.

If we were cyclists we'd be upset, miffed. Feeling neglected, abandoned and perhaps even disappointed. Maybe even angry. But no, we aren't. We are laughing at the profound difference a bit of signal tweaking can make between making a commute by bike if not pleasant, at least survivable, and making it something where only the brave or the stupid will try and cycle round. We are also over the moon about the implications this has for the council's traffic department, where the cycling officers clearly aren't even involved in these kind of day-to-day decisions, and nor are the councillors.

We shall return to "SCOOT" at some other time, it looks interesting, and have engaged in some discourse with the people at the Transport Research Laboratory on its details. They are not yet scared of us, and are answering politely.
Posted by Bristol Traffic at 07:37

One point from the officer's response -

" It is also likely that rat running will be reduced over time due to the increased capacity."

Like gas obeying the laws of physics, peak urban traffic expands to fill the space/time available. So there is little point in creating extra space/time unless it is accompanied by some other form of traffic restraint to deter the expansion.