The judges met on site and have decided to give the Bristol Traffic antibicycle award to Bristol Zoo and Bristol Downs together for their 600 car parking spaces on the Downs with 6 bike racks that don't work for towing children to the zoo.

To make this an unbiased process, what we did was invite some of the cycling activists in the city to see what feature they hated the most, and gave the prize to that feature. Here they are, Terry and Chris on the right, talking to Adam Crowther of Bristol Council, about the Zetland Road junction that got nominated for the award. 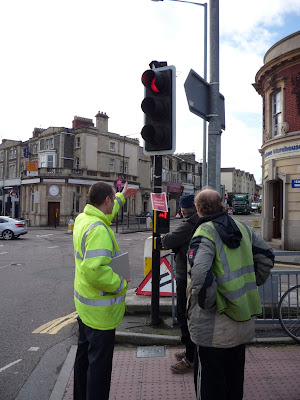 This is where Bristol Council lost the race. Because they are going to try and fix things by changing the signal times slightly. Not just for the cyclists, but pedestrians too. While the troublemakers were loitering, one of these pedestrian people came up and joined in. She saw the hi-viz people with clipboards and assumed they were professionals, so came up and joined in with her own problems. 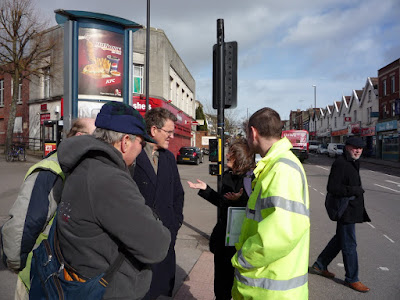 Apparently vehicles turning right from Zetland Road have nearly run over pedestrians who have the green man to cross the bit of the A38 the cars are using. She wanted it fixed, yet the obvious solution: don't give pedestrians a cross phase, didn't get a mention. That was it, the final straw.

Here is Cllr Jon Rogers, still smiling, still thinking he is in with a chance at winning the prize a junction where the police ticket bicycles for cycling on a pavement that cars can park on, and a light sequence designed to kill tax dodgers. But if they plan to stop the tax dodgers dying, it's lost our vote. 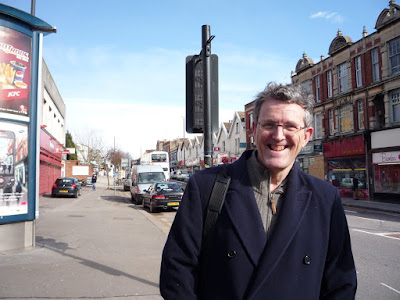 Chris Hutt breaks the news. Apologies for the sound quality and wobbly camera, but we had to get out of our truck for the video, and we were shivering a bit in the bitterly cold wind. The key point: he promises to do better next year.


We must also say, gracious in defeat. Always handy in a politician that.
Posted by Bristol Traffic at 07:26