Dads, you can be Redland Mums too

A special callout to CV53EJX, here going down Cotham Brow. Moving too fast for a good photo taken one handed from a moving vehicle, low light conditions.. 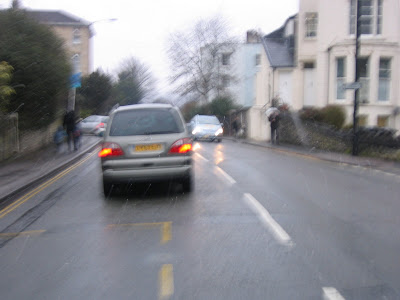 For some reason the school run went well on the way in. Yes, it was by bike, but since the DVLA sent a note asking for the license back in a pre-paid envelope, driving is not currently an option (*). But when you consider yourself a driver, not a cycling or walking under-person, you retain some of the old habits. You know, you occupy a lane, when an oncoming vehicle stops for you, you wave with your hand, they wave back. Sometimes you pull over for them, they wave at you. A friendly morning. Sprog delivered within a few minutes of the specified delivery time in a state of calmness. Perhaps the week off has left everyone in a good mood, no more Redland Mum "Death before a late dropoff" driving.

Then this, on the way home. Being still in motor-driver mode, after negotiating the buses parked in the downhill lane of Cotham Road, on account of the school parents parked in the coaches-keep-clear-zone, I slowed down to let a car coming off Hartfield Drive pull out. Mistake. Bicycles are not allowed to stop to let cars out, as it gave this CV53EJX a chance to overtake the bike and cut up the car pulling out.

Obviously, I caught up with the driver at the zebra crossing, where those bastard students hold up everyone. "I stopped to let a car out", I said. The driver look over with so much anger, his whole face torn up in rage and frustration "Oh Shut Up", I think mouthed, as he sprinted off to get caught behind the next car.

Getting kids to school is pretty stressful. There's a hour or so of a parental attempt to impose schedule on small kids that would rather play with lego or read or watch Horrid Henry. But once you are out the door, there is no way to regain lost time. It's the rule of project management: time lost upfront cannot be regained. Trying to drive aggressively round Bristol on the school run doesn't do anything for your journey time, because that is a function of the number of the junctions (a constant) and the traffic load, while variable, is mostly a function of time, t, and whether it is a schoolday or not, also a function of (t). The equation becomes something like

There is nothing you can do about this, you may as well mellow out unless you are out the door so early that t is earlier in the morning, and hence congestion lower. But not, clearly, this Redland Dad, who is suffering too stressful a life. We hope that it does not impact on their family life, that his kids and partner do not suffer. If they do, the news outlets inform us that there is a National Bullying Helpline which provides support, though you can't trust them to keep the calls confidential, not if the story is interesting enough.

(*) Details not to be discussed. All those people who pine for "real" police rather than speed cameras should note that they've never experienced being pulled over by armed traffic police on US Interstate 5 between Seattle and Tacoma. Cameras aren't as scary.
Posted by Bristol Traffic at 12:04