We are fully aligned with the Evening Post: progress is good for the city, progress means roads, roads mean progress, and people on bicycles threaten this. Whether its on the pavement or the road, there should be laws against them.
If you look at the commentators on any article, you can see that most of the newspaper's web site's readers share these opinions; you can see from the complaints. But complaining isn't enough: Actions speak louder than Words. Which is why, while the rest of press was distracted, the Evening Post launched what appears to be its own political movement, the Bristol Pedestrians Association. The focus on this will be to act as a counterweight to the organised cycling lobby, and fight back against people cycling on pavements, including those bits on the city centre and coronation road where they put a bit of white paint on to add a bicycle path and expect everyone to be grateful.
We have mixed feelings about this party. On on the one hand, they seem to mirror many of our own writings, but rather than just complain, intend to act.
On the other, we worry about them. Just as both Labour and the Conservative parties turned on their leader, Rupert Murdoch, and their parent corporation, News International, could the Bristol Pedestrians Association ever turn on the Evening Post? 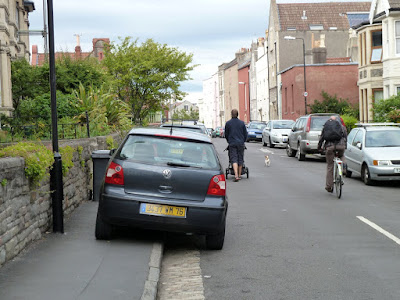 It may happen, if they ever look round the city and realise there may be other causes of problems on the pavements of the city, problems that force pedestrians into the road, where again, they their children in push chairs and their pets are at risk from cyclists.

Or they look at the statistics, and realise that while pedestrians and cyclists have died since this project was founded, all such deaths were a result of collisions involving motor vehicles, that this may be statistically significant, and therefore that other issues may need to be addressed first.

This is why the Evening Post needs to keep the group under control, to stop them going off-message. It's one thing creating conflict to derive web site viewers and hence advertising revenue, it's another to create threats to the status-quo.
Posted by Bristol Traffic at 07:01

Hear hear! Heaven forbid this group actually look carefully at this situation and notice the real elephant on the pavements.