A van partially pavement parked, and with a police ticket. Why the ticket? 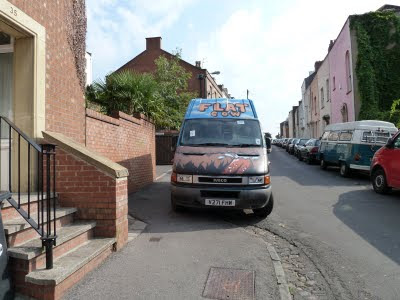 OK, the road tax expired at the end of June. And what's that in the background? 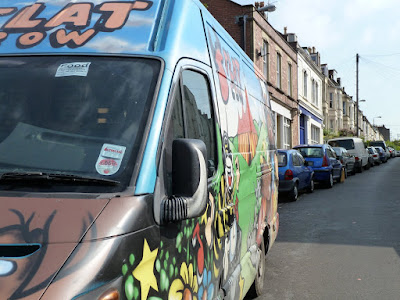 It's another car, this time fully DVLA clamped up while paveparked on double yellow lines. 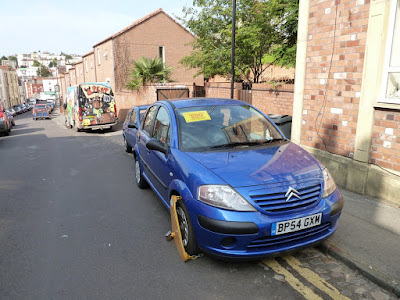 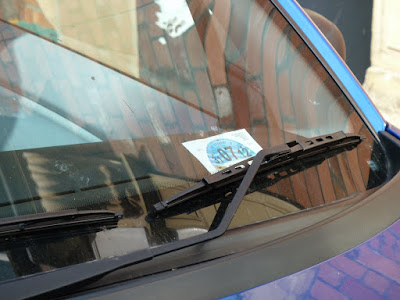 Either they've just (belatedly) stuck in the disk and are hoping to be unlocked, or the DVLA computers are playing up.
Speaking of DVLA computers, someone has put in an e-Petition to make it illegal to park outside someone else's house at night. Having "space" outside your house in the inner city is some unrealistic vision: you park where you can. These people may live in some suburb where Avocados and Coffee Percolators are items of wonder, but the rest of don't run to the window and go "ooh" when a strange vehicle drives down our road, or start fuming when they are still parked outside at 10pm, forcing us to park five metres further away than normal.
Then there's enforcement. Will the police, randomly pick on cars, go up to the house it is in front of and verify that it is theirs? What if they dont' answer because they are asleep?No, enforcement would have to involve the DVLA scanner vans driving round all night.
But we're going to ignore that and worry about the implementation details. You can't use the DVLA address data as it doesn't handle company cars, second homes or students living away from home. That means a new table in the database for every car to have multiple addresses; a mapping of registration -> (postcode, house)+. Except that's a table that needs to be updated a lot more than once a year. What if you go on holiday? You'll need to update it. What if you go to a friends for a weekend? You'll need to update it. Which means a government web site to let you update the legal car parking spaces even from a phone. Which you can defeat with a satnav smart phone that gives you the location of where you are parked and automatically registers you.

No, unworkable.
Posted by Bristol Traffic at 07:38

Not that hard to enforce, really-- you can do it by complaint only. That's how, for example, blocked driveway violations are handled here.