Pembroke Road: where should Barbara Janke remove the yellow lines?

Barbara Janke, leader of the council (at least for the next few days)- has taken on the challenge of ensuring that traffic safety "can be improved" by adding extra car parking in Clifton. Of course, we, the tax-payers, know that this is technically "bollocks", but we also know that anything which discourages walking and cycling does reduce the numbers of Killed and Seriously Injured, so provided you don't actually measure foot and bicycle traffic, you can claim improvements. This is the tactic used by central government to claim that the UK's roads are safer than ever, so there's no reason why the Clifton Councillors can't use it.

First, the bottom end of Pembroke Road as it approaches Queen's Road. Look at that -two wide bits of parking area, almost completely wasted. Only one vehicle has dared to pre-empt the proposed removal by doing a bit of paveparking -and they were only loading up. 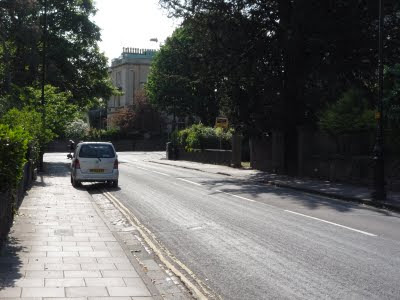 In the other direction, a happy family walks over the zebra crossing. 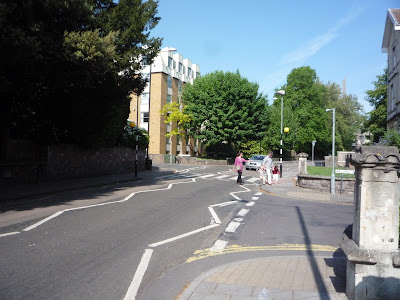 Look how much parking space is being wasted here! Not only is there a zebra crossing -encouraging people to endanger themselves by walking- the zig-zags are taking up space for at least eight cars.

Some readers are thinking "more than eight cars", but this is Clifton, remember. Big cars, for important people, like Ranger Rovers, BMW X-series toys. Some of the students do have smaller cars, but Mini Coopers are acceptable -provided they are the new BMW version, not the old British Leyland editions.

If Barbara wanted to live up to the expectations of her local electorate, especially the Keep Parking Free team, she should remove not just all the yellow lines in these photographs, but the zebra crossing too. This would allow much more parking, and hence more traffic calming
Posted by Bristol Traffic at 07:03

With all due respect, I don't think you're being forward thinking enough. By removing the yellow lines they could then put in traditional British hand-designed and crafted non-mandatory cycle lanes. That way they could show a 'full transition to sustainable values' or some other guff to keep the vegan community happy whilst providing excellent opportunities for free parking for normal people, particularly in the evenings and weekends.