Even as we complain for the current and aspiring councillors for their lack of imagination over car parking -compared to the residents, we must praise the area for holding back the cycling in the area. If they didn't you could imagine families happy to cycle over the suspension bridge to get to Ashton Court, to pootle up to the downs, or even nip over to Clifton village for a bit of shopping.

They've managed -without anyone noticing- to get away without adding any bike lanes, contraflows on existing one-way streets, pass-throughs on dead-ended roads, or any of the cycle city innovations intended to make cycling a viable alternative to driving. They have invested in some no cycling signs, but they are discreet and in keeping with the area -while the Keep Clear paintwork is being allowed to fade. 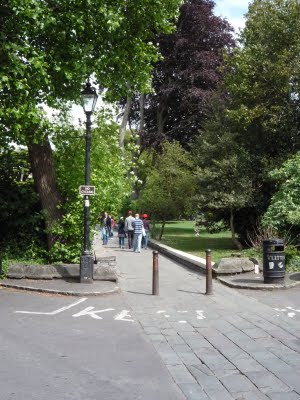 Looking the other way, sadly, three bike stands. But as the area was bollarded off, no parking area is lost, so the car S215BPN can stay happily parked on some more fading keep clear paintwork. 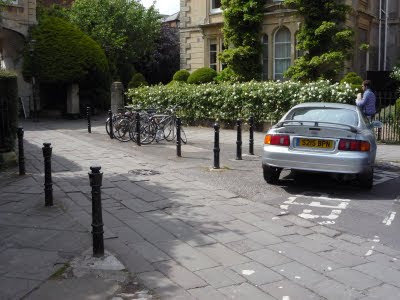 In the village itself, it looks like three people have chosen to cycle in. The provisioning of nothing but bollards to park against does its best to discourage people from attempting this, but still they come and park here on Waterloo Street. 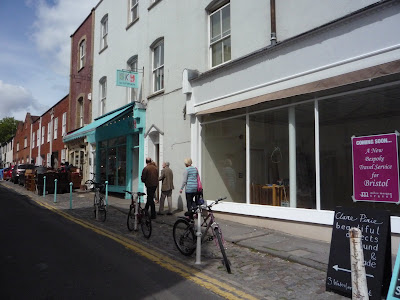 The problem is, despite what cycling city advocates, there isn't room in this narrow street to add any cycling lanes or bicycle parking. There's not enough room for cars to pass each other, and, unlike Montpelier, some of these people are in cars they value, so the road has been made one-way for the safety of the paintwork of expensive vehicles like the BMW HK60CZZ. 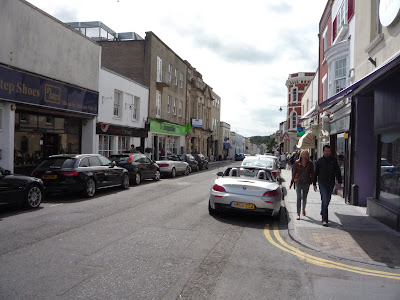 We know that people are pushing for the removal of the in-village yellow lines to add parking, but we don't see the point. The yellow lines act as a way of ensuring there is always space for somebody important. Without them, poor people from other parts of the city would take away all the parking spaces.
Posted by Bristol Traffic at 07:01