That Bath video did go a bit viral.

But, to liven up Sunday morning, here's a short take on it.

Made us laugh.
Posted by Quercus at 01:57 No comments:

"Camera Enforcement Vehicle". An odd term. It has a hint of Mad Max's "Interceptor", back in the days when Mel Gibson did half-decent films. In Mad Max, the interceptor existed to catch criminals threatening the streets and the safety of citizens.

We are sure that the council thinks their Enforcement Vehicle is there for the same goal, but we know what it has done: it has declared war on hardworking school parents who have nowhere to park their 4x4 for child dropoff except in the School Keep Clear lanes. 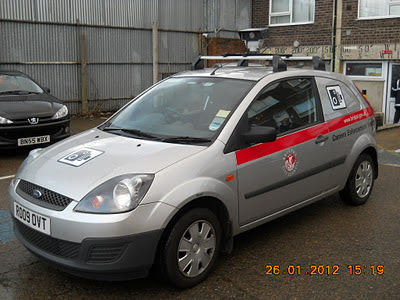 Today: when you see the traffic officers outside the school you know to drive pass, take the five minute hit on child dropoff to avoid the ticket. Once they've been and gone, that's it for the term. Safe. But not now. 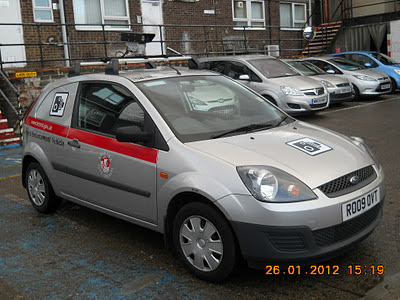 Look at this car  R009OVT. It's got a camera on top, a GPS unit lurking inside. Now all it has to do is drive past a school and it can take a photograph of all the parents parked in the parent-parking-zone, then send them tickets later. Because it can do drive-by ticketing, it can cover multiple schools in a day -increasing the risk of getting caught. And you don't get any warning, you won't know to detour on the dropoff that day. After the dropoff: uncertainty. Did they pick on you today? 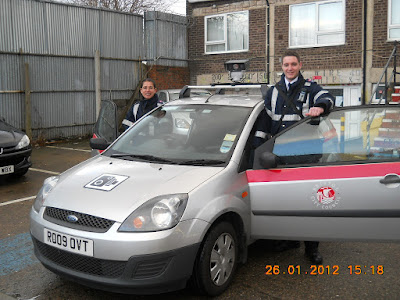 Worse yet the ANPR school parking car is not just targeting school zigzags, but also anyone stopping in a bus stop. Is it really so bad for people to have to get off the bus in the middle of the road? If people are worried about safety then the bus driver could simply drive on to the next stop (as they are apparently officially expected to do)!

They are enforcing loading restrictions, so stopping legitimate traders like Tesco from stopping their vans outside shops during rush hour. What sort of priority does Bristol put on the economy?

Even worse: the Evening Post isn't on our side here. They have joined the War against Motorists, in the same week the evil anti-car EU bumped up fuel prices by declaring an oil embargo against Iran. This is just victimisation

There's only one way to defeat this: stand firm.

Make sure nobody from your kids school calls Parking Services on 0117 922 2198 giving them the school location and exact time morning and evening when they would catch the most parents on a drive by.

Similarly, make sure they don't email parking.services at bristol.gov.uk giving them the same details, or telling them of your favourite secret bus-stop short-stay parking areas.

If nobody tells them of the places and times they should be enforcing parking at schools or in bus stops -we will continue to be able to exercise our right to do so!
Posted by Bristol Traffic at 21:41 No comments:

Why are you taping my wife?

When we get asked "Why are you taping my wife" its usually related to some late evening encounter on the downs in our van, but here we see it on the streets of Bath in broad daylight. Its long, but funny to listen to.

We particularly like the bit in the conversation where she threatens to report him to the police for assault:


'I'm going to say you were assaulting me!'
'Fine, I've been filming the whole thing'
'I don't care!'

If there's a moral here, don't get upset that someone films you in public. Getting upset just makes it funnier when the video goes online, and more people see it.

and there's a soundtrack, here... http://www.youtube.com/watch?v=WKQm3Wn5Dlk&feature=youtu.be&a
Posted by SteveL at 18:35 14 comments:

Contributor RP sends us a photo taken on Grenville Road, running from St Andrews Park towards the back of the Co-op on the Gloucester Road. 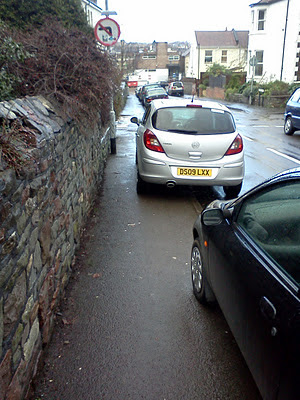 "Parking on the pavement is de rigueur along this stretch of road but DS09LXX has provided us with a particularly good example of how to do it properly and make sure your wing mirror isn't clipped by a passing car. Shame then that the passenger side wing mirror appears to have suffered instead."


While this area is being covered, know that Belmont Road -the one way road right in front of the car, and its south-heading counterpart, North Road, form a good high speed rat-run alternative to Gloucester Road for anyone important who doesn't want to be held up by buses, bicycles or pedestrian crossings. Enter/Exit onto Cromwell Road.
Posted by Bristol Traffic at 07:56 No comments: 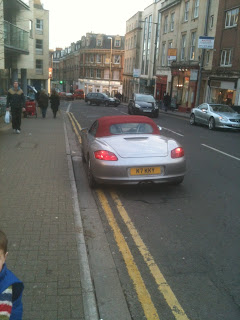 Number 3 in an occasional series of Porsches parked outside supermarkets (parts 1 and 2). Double yellows? Check. Don't want anybody else parking too near. Well out from the kerb? Check. Don't want to scuff the tyres. Personalised plate? Check: K7KKY. And in a moment of compassion, they've gone to Tesco in order to help reduce the £4bn drop in profits, rather than Waitrose. Thoughtful.
Posted by Concerned of Cliftonwood at 16:08 1 comment:

Sorry, no picture, but an interesting possible solution to the ghastly M32 car park which stabs at the heart of Bristol. Just as the River Frome was encased in concrete to make way for the car, why not encase the M32?. Those clever Germans are way ahead again....

Oh, hang on. I just woke up. This is Britain, land of half measures and transport f**k ups. Darn!!.
Posted by mnpinkfloyd at 21:39 3 comments:

Back in April, we posted about a bus that apparently was deliberately driven into a cyclist.

The court case against the driver is scheduled for Wed 4th January, at Bristol Crown Court No 7, at 11:00 or later -more details welcome. We'd also hope the cyclist involved has recovered.

Unlike the Evening Post, we do cover such things, and would welcome a full summary to bristol.traffic at gmail dot com, where it will make its way online.

On a more positive note, nobody on a bicycle or on foot was killed while walking or cycling round Bristol in 2011, which is an improvement on previous years, and makes London's terrible statistics even more significant, from the sixteen cyclists to the  many pedestrians, including one who was apparently killed by an HGV driver convicted of killing a cyclist only a year earlier.

Bristol has -despite some serious incidents- a better year. We also wish everyone that 2012 continues to not only have the same -zero- pedestrian and cyclist deaths, but that the number of injured drops too. If there is a difference between London and Bristol, it is that the police here are more supportive.

Happy 2012 from the Bristol Traffic team.