You cannot be too careful on a dark All Hallows' Eve when you drive home. Ensure that you look all around you, especially at the industrial units on your right as you turn from Trinity Street onto St Philips Road, who knows what nasty creatures maybe lurking there. But just remember, you must shield your face from the baleful red glow of the video camera of a possible Ghost Bike rider. We say possible, as this driver of YCIIEUX did not actually pass though the apparition, so it's not proven yet that they exist...


View on YouTube
(video and text from Obsydian Bris)
Posted by Bristol Traffic at 21:00 No comments:


As more and more of the communist cycling brigade resort to personal CCTV to aid them in whining to the establishment, how can we protect our right to privacy?

Surprise. And if surprise isn't enough a bit more speed will help.


Here the britain-hating-communist is too dumbfounded to even turn around and follow the vehicle to record the number plate, they never expected the vehicle to be travelling "a la continent" to the right of the lane dividing barrier.

Posted by Bristol Traffic at 08:00 No comments:

The cyclists are building a surveillance state: a real one


We have just discovered Richard Wellings, a comedian who pretends to be part of a think tank, IEA.

This is funny: he's running a spoof think tank, a bit like The Thick of It without the swearing. More like the coalition side of the series, where they all go on some off-site meeting and compete on daftest ideas: "lets bill poor people for having spare rooms!", or "let's make it legal to run over pensioners", going round this in circles until someone says something like "let's stop building a nuclear submarine fleet for ICBM delivery as the cold war ended in 1989" and then there's one of those silences round the table as the person who said it looks slighly embarrassed and someone else has to step in .

Anyway, This Richard -is he a new Ali G? The Borat of Politics? - is trying to pretend that there is a mass lobby of cyclists secretly trying to build a mass surveillance state?


See? Imagining the cycling campaigners, who can't even stop their councils painting over bike lanes, building a police state? Clearly a spoof.

Because if he wasn't a spoof character, if he really wanted to show where the cyclists were building mass surveillance infrastructure, he'd look away from London and over to Silicon Valley, to Mountain view -a city that goes so far as to say "bicycle friendly" by the side of its wide and unblocked cycle lanes 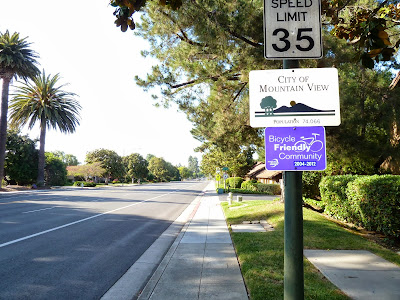 Looking on the Stevens Creek cycle path, we can a small child pedalling on their own, helmetless. 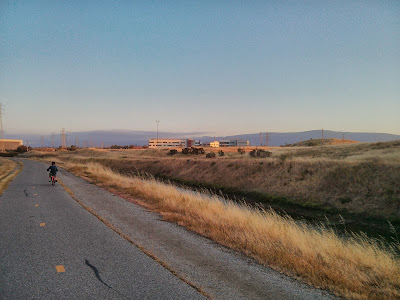 That's bad enough, but it's not what we are talking about -we are looking at the buildings either side of it.

What is that set of buildings on the right?

It's The Googleplex, the mountain view site that hosts the core engineering teams.

What does the Googleplex offer its staff to get around? Hoverboards? Autonomous Cars? No: bicycles. Shared bicycles. Sharing capital items is clearly communism, sharing bicycles is an attempt to destroy society. 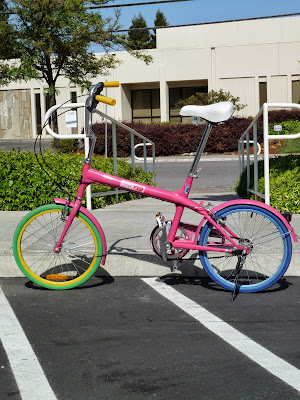 Now look in the other direction, to the eastern edge of mountain view. Strange looking buildings going off into the distance. 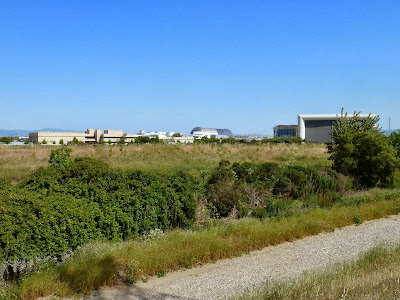 This is Moffett Field -a military, government science and private airfield, hosting, amongst other things
This is the Military Industrial Complex viewed from a single path. One side: the engineers building the systems to store all our personal emails. The other: the NSA, the US army, NASA and its various "secret" space shuttle projects, plus psychological warfare groups.

A short distance away from each other: close enough that you could hook up direct fibre optical links from the NSA buildings to Google -the kind of thing you'd do if you wanted access to the emails.

And what is not so much dividing the area as uniting it, as joining the two together?

These are the cyclists building a mass surveillance state, and your spoof think-of-it think-tank minion is claiming that its the UK cycling campaigns, well, you're clearly out of your technical depth.

Come up with some that is vaguely realistic and so can entertain us, like, say, having Badgers move the Goalposts or something
Posted by Bristol Traffic at 07:00 No comments:

A subversive becoming known to us, Wheels on a bike, alerted us to this: cyclelanes4cash. A story he broke and which made the online cycling press. Well, with the Evening Post outing itself as nothing but an entertainment magazine, the online press, including bristol24x7 and the bristolian (also in print at various fine drinking establishments) are the news -news the post follows 2+ weeks later.

Anyway, Colston Street -from the centre to Park Row. The easiest cycle route up this hill, and so a popular alternative amongst the tax dodgers to "death by park row", which is not only steeper, it abandons you at the triangle with a forced left turn: precisely the wrong direction and option to reach the university alive.

It is also Sustrans route 4, London to Wales for the same reason. Due to its popularity, the council provides a cycle route up the hill.

Or to be precise: provided. 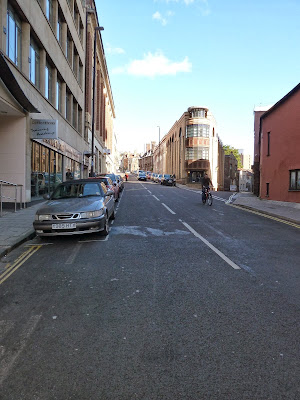 five car lengths worth of the bike lane were painted out and turned into paid parking spaces. why? So the council can raise money.

We don't support this. Why not?
1. We can already park for free in a bike lane
2. Paid parking spaces use up free bike lane parking
3. it forces cyclists into our way, be it the pavement or the road.

As it is a climb, keeping the marxists out of our way actually increased journey time, yet instead the council here is forcing them to get in front of us. And for what? £20K/year? 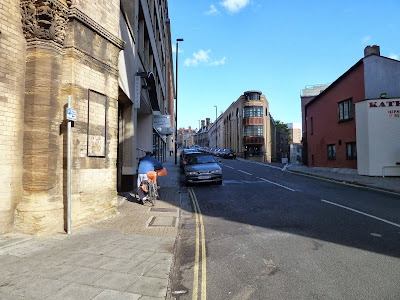 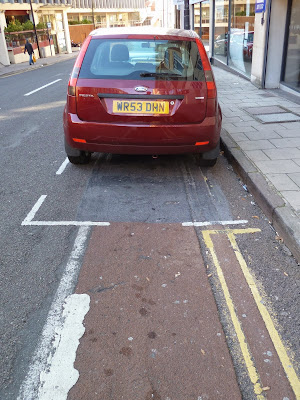 Up the hill the red paint returns, showing that if the council were serious about revenue, they've got a lot left. This is a fact that must concern the cyclists, as now the traffic department has declared open season on every bike path in the city. 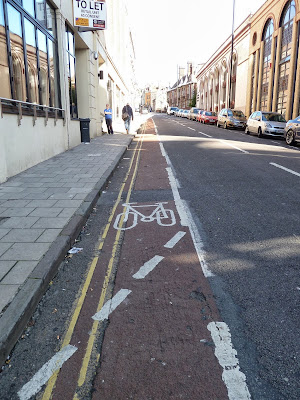 Specifically: if there is a bike lane along a road where there are some clear revenue opportunities, the bike lane is doomed. 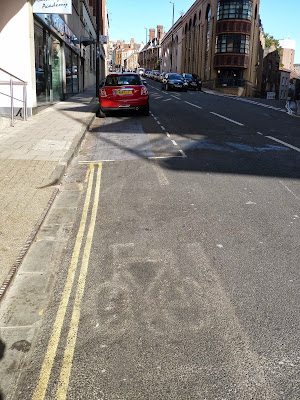 The senior council management -Mayor George Fergus and Cllr Mark Bradshaw have claimed that they are reversing the change. Presumably it was that or face public ridicule and the need to update the 2014 bristol cycling maps by removing (more) of the bike lanes.

Maybe so, but it shows that the Traffic Planning department has gone completely rogue: looking after its revenue interests ahead of any other concern: not just the needs of those cycling tax-dodgers, but the needs of those of us driving up the hill who don't want to be held up by subversives who can't get above 6 mph on this hill.

Posted by Bristol Traffic at 14:35 No comments:

Stokes Croft: the marxists are coming for our pavements

Britain is a capitalist country: it belongs to the people with money. We show that we in this group by driving cars.

People who cycle they are, well, marxist followers of Ralph Milliband. They hate Britain, and look to Europe for inspiration.

Here we see on the Croft, someone taking over the pavement to sell things other than sex or drugs, with customers an their bicycles up on the pavement too. 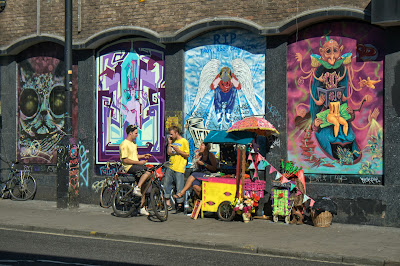 Across the road, the bike park area is overflowing -and discussions are now afoot to expand it. 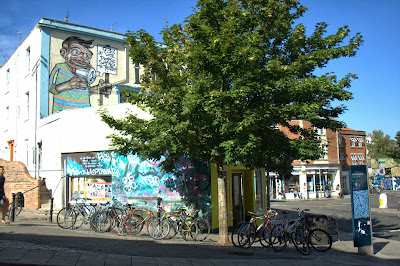 This is not our stokes croft, where the pavements are like the bus lanes: short stay parking 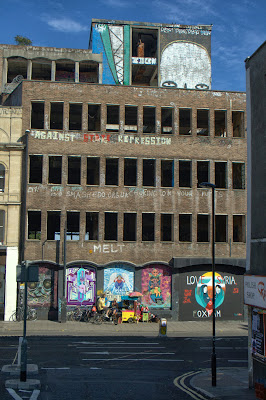 All is not lost. Here on Moon Street the pavement provides excellent parking opportunities. 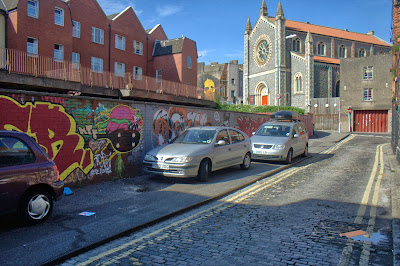 Resist the marxists! Stand up for Britain. Park on a pavement today!

Posted by Bristol Traffic at 08:00 No comments:

Stokes croft has always been built on a few key themes: driving, parking where you want, fast-food, paid sex and substance abuse.

Yet  those traditions are under threat.

Here a delivery cyclist traipses along the lower croft 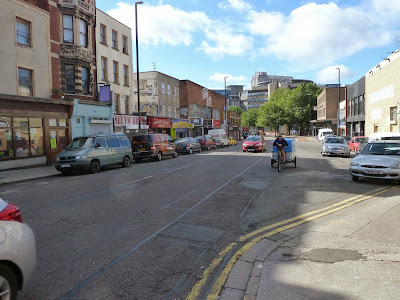 At the other end, two cyclists are waiting to turn right. Not only are they both without helmets or hi-viz, there are two people on the bicycle in front. 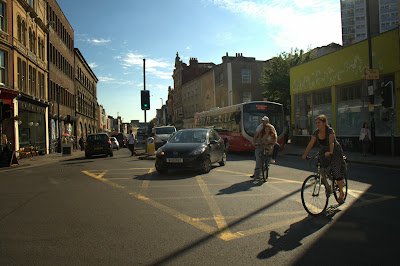 Round the corner, more bicycles, more people looking -happy-, even though they cycled there 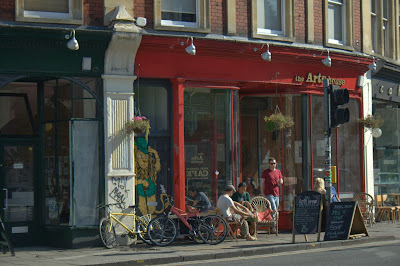 A few streets away, the traditions of the area continue 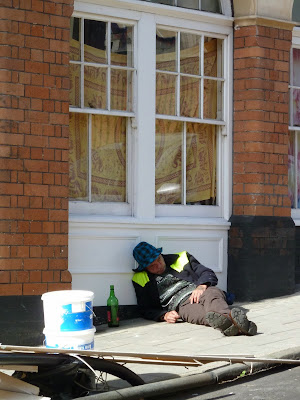 But notice this: as this person sleeps drunk on the pavement, he wears hi-viz.

Even here, the traditions of Stokes Croft -no, of Britain itself -are being eroded!
Posted by Bristol Traffic at 12:00 No comments:

In one stretch of the croft, all lines have been painted out. 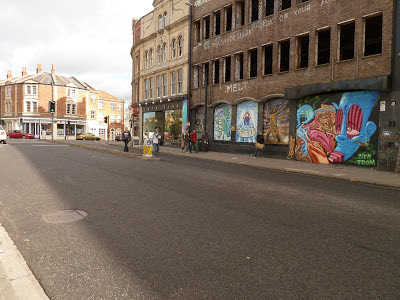 It is oddly calm, especially now you can park where you like for as long as you like. 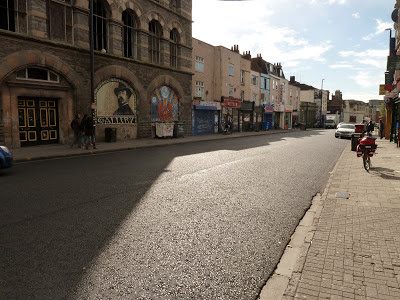 There are a few people on foot and bicycle 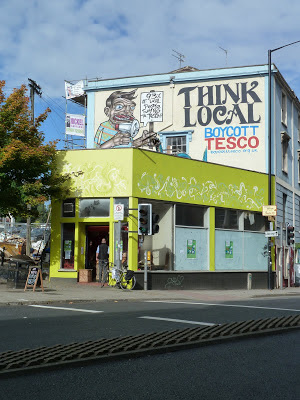 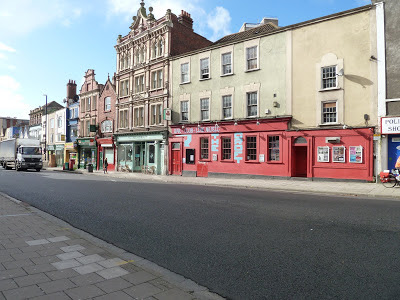 We wonder if this "shared space" will see small children playing along stokes croft. We also hope that parking restrictions cannot be enforced while the yellow lines are absent.

Posted by Bristol Traffic at 20:07 No comments:

Stokes Croft: its own beer -and a shocking new pub

Today marks the start of the Bristol Beer Week, an event dedicated to showcasing some of the mind altering substances manufactured and sold in the city.

If there is one beer we need to highlight, it is Stokes Croft IPA, from the Ashley Down Brewery. This is the first time that Stokes Croft has its own beer. It has had its own Spirit - Methylated- for some time, so this beer marks another sign in the gentrification of the region.

We must also highlight a new drinking establishment on the street, taking over The Croft, is a new pub, the Crofter's Rights. 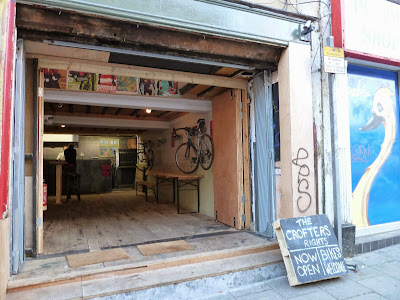 While normally a new pub is something to welcome, especially now that it is selling Stokes Croft IPA, this pub is unusual.

The sign at the bottom says "bikes welcome". And inside -can you see it: hangers for bicycles on the wall.

Cyclists are being encouraged to cycle to the pub, get drunk and go home. What do we get? There are no pubs between Bishopston and the Bearpit that offer parking spaces to their customers.

This shows how gentrification is changing the face of the area. Once people in the Bearpit start drinking single malt meths, it will be all over.
Posted by Bristol Traffic at 20:07 No comments: