As the arrogant self entitled owners of an Important Car for Important People, we recently received a communication from the manufacturer. Here it is, unabridged

Due to the large number of people who have been killed recently by drivers —especially pedestrians and cyclists in hit-and-run incidents— the transport minister Jesse Norman has been in touch with us. He would like to pass on a message

"It’s great that driving has become so popular in recent years but we need to make sure that our road safety rules keep pace with this change.

"We have some laws that ensure that drivers who kill others are rarely punished, but, given recent cases, it is only right for us to look at whether dangerous drivers should face the consequences."

We at BMW would like to remind our drivers that all of us are representatives of the BMW family; whenever one of us drives like an utter wanker, we are all tarred in the brush of shame. We must strive to ensure that the badge of utter-wanker-driver continues to be held by Audi drivers alone.

Please, study the highway code, and remember that you should be prepared to stop at "Give Way" signs rather than slow down slightly. In particular, when joining a roundabout you are expected to yield to all users, including cyclists. The Highway code also covers other signs worth learning, what the orange light in traffic lightss, and the rules of zebra crossings.

The next time your BMW is due in for a scheduled service, please get in touch to attend one of our free "safe BMW driving" seminars, whose topics include:
We also offer to recalibrate the speed warning to 90 mph —just ask the service team to lower it. 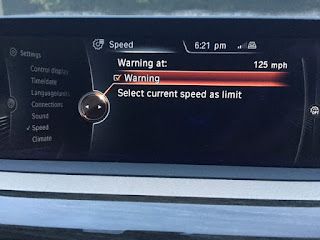 Finally, when on a motorway, please leave at least two metres difference between you and vehicle in front —even when an owner of Ford Fiesta has mistakenly pulled into the fast lane while only doing 75 mph. It's safer for everyone.

There you have it. We'll try and drive better than others, and even explore the do-not-disturb option or our phones. We should be able to keep it up for a few weeks to see whether you can get used to it. Motorway speeds are probably going to be the tough one, given that even Corsa drivers will end up passing us —that's not what we paid for.

PS: Why are we getting email from Jaguar Land Rover Australia saying "Congratulations on the recent purchase of your Evoque, and welcome to Land Rover."? Some mistake surely.
Posted by Bristol Traffic at 17:10 No comments:

Last week we discussed a (flawed) stopping distance experiment, where we argued that you cannot stop from 18 mph to 0 in 6.5 metres, no matter what the police claim. That's when you are prepared to halt and planning the exact moment to pull on the levers.

What does it a real emergency halt look like? It looks like this video. Taken about half an hour before the one of a BMW driving down a pavement to get past a traffic queue, for reference.

Here is what it looks like when someone runs out in front of you while you are freewheeling down a hill (Hampton Road, BS6). Speed? Let's assume 18-20 mph. You can hear from the noise of the (hope) hubs that there's no pedalling, so this is just a gentle 5-10 mph curve round the mini-roundabout-of-death, a few spins of a drivetrain in precisely the low gear you are always in when you come up the hill from the Arches, and then coasting, relying on gravity to do the work.


The entire incident is over within five seconds. There wasn't enough time to slow down before any collison would have occurred. Shouting and swerving while you slow down is all you have.

The gradient of the hill will have made stopping hard, and this wasn't the "prepared for emergency brake" setup of our previous experiment. This is real world going round the town with your hands on the tops of the levers, with gravity fighting the decelleration. The combination of the time to see and actually slow down puts the total stopping distance at something like 20 metres.

Brakingdistances.com says you for a car @ 30kmh/20mph on a -12% gradient you shoud expect 6m of thinking, 14m of stopping. Which seems consistent.

Now imagine that incident happens once a "Kim Brigg's law" is passed: a pedestrian crosses the road, cyclist > 12m away, travelling at 18-20 mph. Cyclist sees pedestrian, shouts out. Tries to veer to the side, hits the child instead. That would appear to be enough to get the mini roundabout reinstated as Bristol's Public Gallows, and your eviscerated remains left to hang for days as school parents block the roundabout in their Volvo XC90s. "Look at that cyclist, he deserved it. Now, why is this anti-car council stopping me from driving at 30, can't they see I'm late for school?"

Who is to blame here?

It's not the kid's fault he wanted to be with his friends, it's not his fault all the parked cars made him invisible until he ran out.

He didn't look. Maybe he was enthusiastic about wanting to be with his friends. Maybe he listened for a car, but didn't hear any engine, so carried on out. Children are like that: Enthusiasm is not a crime.

What did the cyclist do wrong? Well, that's a question. Is freewheeling down a hill at 18-20 mph speed limit "reckless"? "careless"? Wilful endangerment of themselves and others? The Crown Prosecution would probably argue that, while everyone from the Daily Mail to the BBC would use verbs like "plowed" and "flew" as they covered the trial. In which case: driving round the area at 20 mph, especially in a low-engine-noise vehicle (hybrid, electric) is probably even more wilful.

The one thing you can point to the cyclist and say is: you knew term time had just started, and there were other kids on the pavement. Therefore it was likely there'd be more chidren ahead. So maybe you should have braked all the way down that hill. But: no matter what speed you go down that hill on a bike. if there is a car going the same way, it'll be right behind you or trying to get past.

Which moves to a more controversial question: is 20 mph too high a speed during school start/finish times? Should we drop from 20 mph to 15 in areas near schools? For everyone, drivers and cyclists alike?
Posted by Bristol Traffic at 18:12 No comments: 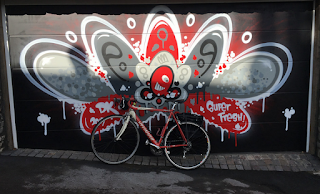 It's term time in the city, a so the morning rush hour is worse, and we've seen the return of the mid-afternoon one, seen here.

In order to get anywhere, you need "flexible and imaginative solutions" as our Brexit negotiators say.


Here the driver of WN15UKX finds it impossible to make progress without risking their wing mirrors.

Residents of the inner city know that having wing mirrors is a sign of weakness, but here the driver of WN15 UKX isn't going to let the fact they value their bodywork slow them down. Instead, a neat little nip up onto the pavement, a quick sprint at 14 mph down the pavement and they are on their way. Maybe he was late for child pickup. Because you wouldn't want your child to walk home: it isn't safe, not even on the pavements.

Its drivers like this which give us selfish wanker BMW owners a bad reputation.
Posted by Bristol Traffic at 23:17 No comments: