Is this car GK06AUN, pictured one morning in Clifton
(1) turning on the wrong side of the road
(2) parked? 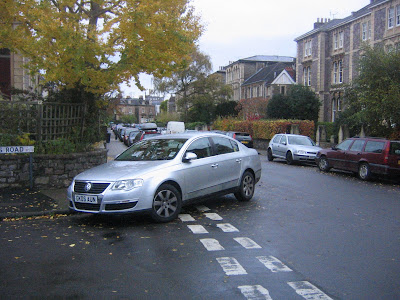 The correct answer is: it makes no difference. Oncoming traffic has to assume they are are turning vehicle, so slow down for a junction in a way that the painted give-way signs would never achieve.

This shows how Bristol's drivers do think of the safety of others, not just when driving, but when parking.

(this was published in 2009; updating the tags has had it relabelled as new. There's probably some yellow lines here now, forever deriving somebody important from parking on the closest corner to their home)
Posted by Bristol Traffic at 22:20 2 comments:

People ask us: why no coverage of RLJ-ing cyclists? Well, we generally leave that to grumpy Havana Coffe Hamid, on account of his soundtrack choices and spelling skills. But when the opportunity arises, well, we do

Today then, this fuckwit 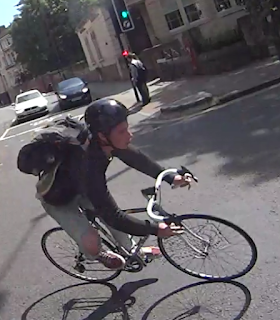 This is filmed from St Pauls Road, leading from the dull part of town, Clifton, to the more interesting bits, albeit after a final bit of climbing and a university area inevitably full of texting students.

Approaching the lights, they're red, time to hang around for a while waiting for green. And then slowly off, in case the BMW driver is in an hurry. No problems there, except carving out from the left is someone on a road bike, looking like they are near that 20 mph limit, blowing straight through the red light to make a high speed turn into St Pauls Road.

On the shout of "fuckwit" you can see some surprise and a bit of a wobble, though delayed. Leaning into the corner like that, he was fully committed to the bend: the only two options were: carry on or come off sliding sideways exploring the concept "road rash" more fully. It'd have been interesting to see if a scream of "no brakes" would make him choose the latter,

What were the risks this fuckwit exposed themselves to?


And of course, if our tax-dodging reporter hadn't been so slow setting off: they'd have been in the crash too. Which is why we think this fuckwit deserves coverage.
Posted by Bristol Traffic at 23:03 No comments: