It's January, and you can see who is out and about on their new fixie bike. This rear view video show our (expendable, tax-dodging) reporter turning off St Pauls Road, Clifton, onto Pembroke Road,
at a double-mini-roundabout put in to break Satnav. And coming up from the triangle, along Queen's Road, here comes someone in a shiny clean fixie, who decides to slipstream our reporter (expendable, tax-dodging).

This is where they a number of mistakes
We'll assume they were a bit drubbed from the climb and so didn't feel like passing, but they should have hung off to one side. At the very least, when they got behind our reporter (tax-dodging, expendable) they should have looked at the bike, and realised that it was a mountain bike.

In the video, you can see that the fixie rider (tax dodging, expendable, not so good at braking fast), gets to cycle behind the mountain bike until 00:30, when, in front of our reporter, someone on a phone steps out onto the zebra crossing. This puts our reporter into an aggressive-but-non-emergency brake. All well, until someone one a bike shoots up their left, almost into the aforementioned pedestrian. Which was a bit of a surprise.

It was only later, when the question "where did that rider come from", went through our reporters idle mind, that they went for the rear camera and had a look to see what happened. As you can see, they had their hands on the bars, drifted in right behind our camera, and, when the bike in front has to do that stop, nearly ride straight into the back of them, only avoiding it by swerving to the side.

Mountain bikers don't do chain gangs. They don't go along taking turns at the front, slipstreaming each other for performance, before hanging at the back to cycle no handed while you rummage in your back pocket for a gel with the same texture and flavour as baby food. Nor do they try and communicate with each other with little twitches of the hand, or pointing down and waving to say "there's something on the tarmac to avoid".

Instead they cycle along with enough of a gap between the rider in front so that they can see, enjoy and then learn from the mistakes the rider in front makes, rather than join in the crash. Food? Maybe, but they'll stop for that as they are generally lazy and view "cycling no hands" is one of the precursors to a trip to A&E. As for pointing out gravel, potholes or other surface hazards, those are not things to swerve around, they are there to jump over.

And, unlike fixie bikes with one front caliper brake, a modern MTB has hydraulic disk brakes, which, if the bubbles have been squeezed out of the cables, lets the rider bring the bike sliding to a halt with only the light touch of one finger on the brakes.

Because of that one-finger braking, mountain bikers are generally split into the "index finger faction": cycle with their index fingers on the brakes and the "middle finger faction", who use their middle finger. Whatever the choice, except on uphills, they're going to be cycling with their chosen finger on the brakes at all times. And when needed, they'll know to put that on, push their butt backwards to keep maximum weight on that rear wheel, with its 2.2+ inch surface on the ground, and so rather than skid, bring their bike to a halt faster than you could stop a British Leyland era Austin Mini (*).

When you come up behind a bike, see that its got wide tyres and disk brakes on the back, instead of cycling close enough to see whether the brakes are Shimano, SRAM or Hope, you need to think "this is a bike which can stop fast ridden by someone who may know how to use them", and not cycle right up their arse without even saying hello. 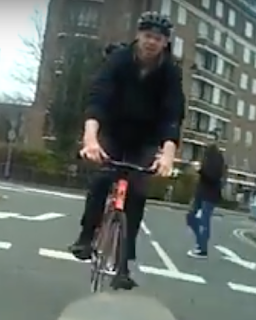 Do you know this rider? Are you that rider? Whoever it is: either hang off the side or stay back, especially to mountain bikes. Thanks

(*) MkI Minis had non-servo assisted drum brakes and to stop rear-wheel skid depended on that battery in the boot along with the WD-40, the hammer and the tow rope. As a safety feature, it was designed not to go very fast.

Posted by Bristol Traffic at 20:46 No comments:

A Death on Brook Road

There's almost no coverage of Brook Road on this site, not because its out of our normal coverage area, but because nothing ever happens there. Apart from one incident where a manic van driver on a phone forced our reporter to jump off their bike and onto the pavement, nothing.

Which is why its so awful to hear that someone died here: Nick Graydon, age 27, died December 9 2017, after injuries sustained from a collision with a cyclist on Brook Rood who had apparently turned into Brook Road from Lower Cheltenham Road.

It happened at 8pm, which is of course dark.

Articles say "he stepped out from behind a van". Which is something we want to highlight, "stepping out from behind a van" is not exactly uncommon in Montpelier: it is also known as "walking around Montpelier". Because key feaatures of the area are vans, people walking, and pavements narrow to nonexistent. As an example, here's a continuation of the previous video, crossing Monty during the primary school run: count how many times somebody steps out from behind a van.

Like we said, we don't know the details. but "stepped out from behind a van" is one of those statements which pushes the blame onto the deceased, like "the cyclist swerved to avoid..."

Anyway, let's see what happens next after this, a tragic death which shocked everyone nearby.
Posted by Bristol Traffic at 22:57 No comments: