Cummings: "the car told me to do it"

The government is scrabbling for excuses for why Cummings drove 260 miles from London to Durham in March, did a 60 mile round trip while there, and then another 260 miles south in April.

The main claim "parental instinct out of concern for a child", coupled with a revision of the lockdown guidelines, aren't proving sufficient -especially given the day trip to somewhere 30 miles away.

Now they look for more excuses: the autistic child, the dying uncle.

But there are two more they need to consider and wheel out
Now, no doubt some readers will be reading excuse #2 and thinking "WTF?". If you are one of those people: know that you are one of the little people.

Cummings is important. We know that not through is arrogant and self-entitled disdain for the lockdown laws –but because he drives an Important Car. We saw it on the telly when he was doorstepped. How do we know it's important? Look at the BBC video.
Yes, Cummings pretends to be closing the tailgate by hand, but he has pressed the button before doing that. He's realised that to avoid being seen as one of the elite, he needs to look like he doesn't really drive an important car. But we Important People see his trick.

And what do important cars care about? Electrical power. Electrical power for that tailgate, the satnav, the hands free bluetooth phone link, the camera and computer for lane tracking, the adaptive cruise control, the power windows, the power sunroof, the 8 speaker audio system, the rain-sensing mirrors, the runflat tyre pressure monitoring, the side radar collision avoidance, the ultrasonic parking sensors, and the always-on headlights. Oh, and starting the engine -especially in an environmentally smug car which turns it of when you are stationary, waiting for the parking sensors to tell the engine control unit that the car in front has set off, and it'll be time to move two metres forward.

Even when parked up it's busy -its alarm powered up to make sure unimportant people keep out of it.

Which means, they have expensive batteries which need to be kept charged.

Based on our extended experience, an Important Car for Important People driven 250 miles/month, with 3/4 of that on motorways, is happy. But during lockdown, it has been complaining about neglect 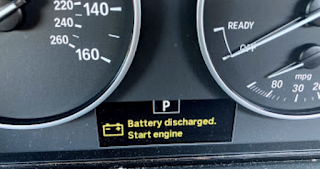 Battery Discharged it says -Start Engine.
And on the LCD of the "things to look at when bored" feature, it expands this 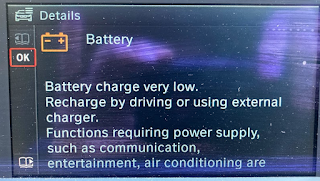 Battery Charge Very Low.
Recharge by Driving or using external charger
Functions requiring power supply, such as communication, entertainment are
+some warning which continues if you scroll down on the "controls to play with when bored" dial

See that? "Start Engine". "Recharge by driving". Also, see how the warnings were all about what matters in an important car 'communication, entertainment and air condition', not things that important people don't care about or understand like 'engine won't start'.

What was he to do?
Well, he could have done what we did. bought a £50 quid charger, stuck it under the bonnet and ran a power cable over to it. That would not only have charged his Important Car for Important People, it would make passers by think he had an electric car. Because nowadays, running an extension from your front garden to your car is the new status symbol. Especially if you stick an "e" on the back of your car where it tells people what specific variant of the expensive-car category it is.

Why not do that? Maybe he realised that he was about to come down with Covid-19 and because it takes 24h to buy a battery on line and have it delivered, by the time it arrived he would be self isolating and unable to go outside and wire up his Important car for Important People.

Driving to Durham with his entire family. was the only thing he could do. Well OK, he could have got in alone gone up to the M25 and done a lap of it, but really, that's not only boring, there's roadworks between the M3 and gatwick turnoff, so it'd take longer that you'd expect. And without his family to keep him company, nothing to do but make hands-free calls to #10 telling Boris what to think. And that must get really tiring, day in, day out -especially now that Boris is @ work rather than on holiday somewhere.

Nope, Durham it had to be.

So while other people are denouncing him for being an arrogant self entitled elite wanker -which he is, admittedly, we don't support those condemnations for illegally driving across the country to bring Covid-19 to Durham just because he didn't want to have to entertain a four year old all on his own.

At least he didn't come to Bristol.
Posted by Bristol Traffic at 15:00 2 comments: