We're an organisation which believes in data and experimentation. We have time for experts. 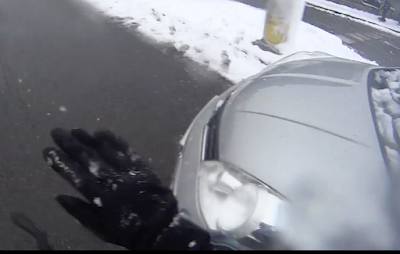 Normally we can't be arsed to send videos of near misses to A&S police on the basis that it seems an exercise in futility. Let's look at the track record of our limited number of attempts

It's got worse. We've gone from Prosecute to Won't Prosecute to No Record of Incident. And that with  a trip to Yate added in.

It's 2019, three years since the last experiment. And this one merits it. A Nissan Note nearly being driven into a cyclist because the driver has chosen to drive the wrong side of the mini roundabout, in winter conditions, where the cyclist is forced to swerve into snow and ice to avoid the car driving into the side of them.

Our tax dodger (expendable) is coming into Clifton on Suspension Bridge road, heading towards the more interesting parts of the city. Because all the side roads are iced up, the main roads are the only options, and there, the central lane where enough traffic has melted the snow.

Our cyclist carefully cycles round the roundabout, making a controlled turn through the junction, avoiding snow, avoiding banking into the turn, lining up perfectly to exit in the snow and ice-free part of the road -the only place to be in these conditions. 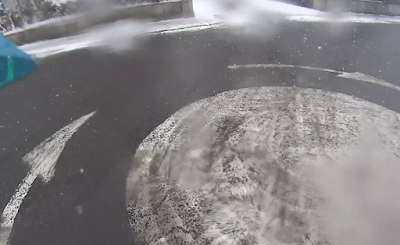 Except, what's that engine noise coming from the right hand side? It's the Nissan Note VU61HXM, also taking the roundabout, this time on the completely opposite side of the roundel. If they have a driving license, it had better be a French one. And they have to be able to say more than "quoi? je comprende pas? Est-ce-que il-y-a une probleme?" when questioned. 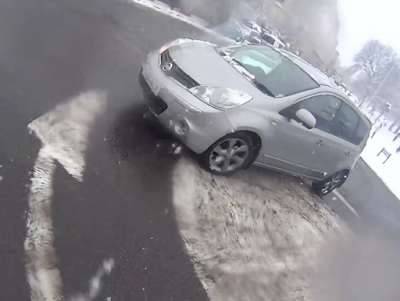 In normal weather conditions, that would be an selfish and dangerous thing to do. In snow conditions, conditions where the police and met office were warning everyone to think before they travel, and take care when they do —it's tantamount to attempted murder.

The cyclist was: positioned on the snow free part of the road, carefully using their (hydraulic disc) brakes, riding with tyres (2.4" Conti Mountain King ) suited to bad weather, and taking corners really, really carefully, both hands gripping the wide bars for maximum control. Oh, and avoiding the side roads which don't get swept or gritted.

The driver "Oh, this cyclist is taking too long, I'll just dive across the road. Oh, they are shouting and waving. I shall carry on without slowing down or changing my line —they shouldn't have come up the inside of me"

When you see a car aiming straight for the side of you, there's no point trying to argue rights of way, it's time to make an emergency turn into the snow -avoiding braking at the saame time as that's guaranteed to lead to a fall. Then, once to side, controlled deceleration. 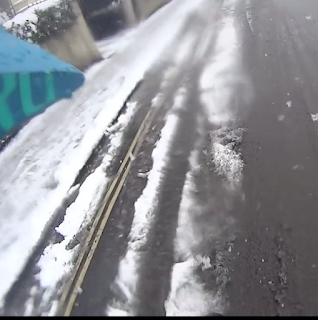 If there had been any ice underneath, this would have caused a fall, and, with a car twenty centimetres away, guaranteed injury. We wonder what the driver would have said then —aassuming they stopped at all. 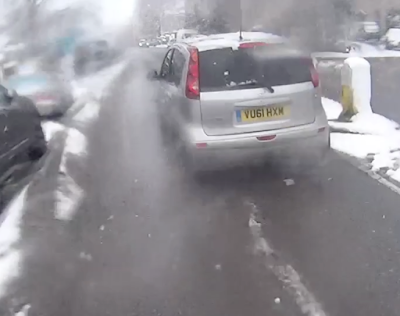 It's interesting to look back. They only come up behind the bike within the last ten seconds of the approach to the junction —the time the cyclist is gently slowing down. And, irony of irony, because the tax-dodging cyclist stopped to let the family cross the zebra crossing. If instead they'd gone straight over the crossing (the kids hadn't stepped out, so it'd have been legal, albeit antisocial), then VU61HXM wouldn't have had a chance to run over the cyclist.

At the junction itself the driver didn't even make any attempt to drive legally. Look at the angle of the front wheel. They were lined up right from the outset to cut across the roundabout and the cyclist.  Not a moment of hesitation, not even to safely assess whether there were any drivers approaching from the right. The decision to drive on the wrong side of the mini roundabout had been made before they started to pull out. 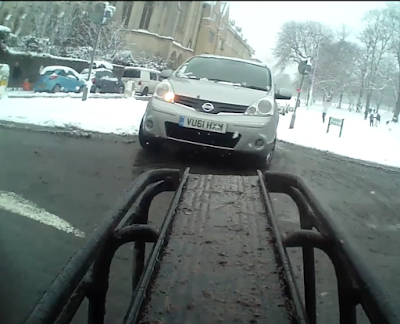 And it's not like they "just" went onto the painted roundel. They barely grazed it with the passenger side wheels. 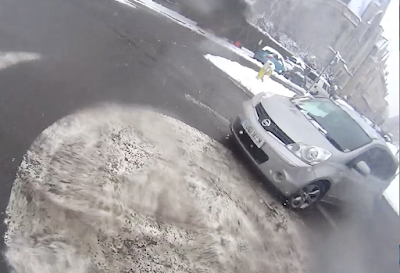 The rear view also shows how close they come knocking the cyclist off. With the wide angle lens, that is probably within 15 cm. 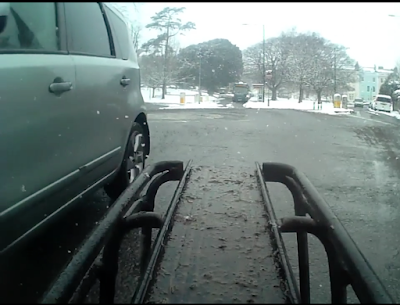 The only way to put a safe gap in was to put both hands on those MTB bars bars and steer into the snow, while taking care to stay upright. 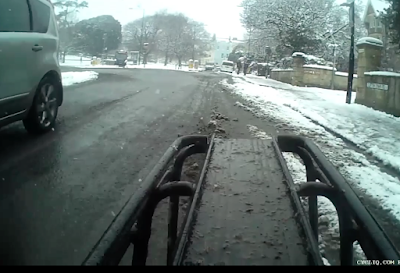 This is one of the worse bits of driving experienced for a while. In the worst road conditions Bristol has experienced for almost a year.  In terms of actions, it makes the cut for the CPS guidelines for prosecuting dangerous driving.

And particularly:
Let's see what happens. Filing planned for Saturday, with the full "dull" long video and a detailed statement; will do a followup in the week to make sure the NIP is in the post, then we'll see whether this makes the cut as something worthy of the CPS's time. Oh and this time: ruthlessness from our side. Missing report: escalate. Failure to prosecute: escalate and publicise.

If A&S police don't do better than they have done in the 2014 and 2016 experiments, they may as well cancel their safe passing program and give out Nissan Notes instead.
Posted by Bristol Traffic at 22:46 2 comments: